In 2000, when William Hickey, president and CEO of US-based packaging firm Sealed Air, took a long-term view on the future of his company, he predicted that by 2050 Africa would have replaced China as the world’s manufacturing hub. 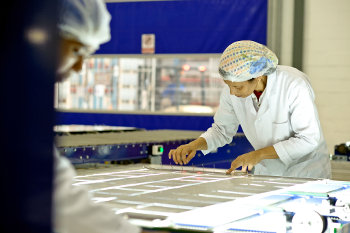 “Eleven years later I think we are behind . . . 2050 becomes a challenge [but] I still think it is doable,” Hickey said during a session on manufacturing at the recent World Economic Forum on Africa, held in Cape Town.

Headquartered in New Jersey, Sealed Air manufactures a wide range of packaging materials and equipment for food, industrial, medical and consumer industries. The New York Stock Exchange listed company has a presence across the world, including Africa.

With factory wages rising in China and other parts of Asia, some multinational companies are considering to move their production plants elsewhere in world.

Manufacturing accounts for a very small proportion of GDP in most Sub-Saharan African countries,” said Ann Bernstein, executive director of South Africa’s Centre for Development and Enterprise. Manufactured goods currently constitutes only 14% of Africa’s exports. Even in South Africa, the continent’s industrial powerhouse, manufacturing has declined significantly since its peak in 1981 and its contribution to the total economy is now just 15%.

Rob Davies, South Africa’s Minister of Trade and Industry, told the session that there are currently two main drivers of Africa’s growth. “The one is the minerals boom, and the second one is growing domestic markets. I think that both . . . need to be consolidated with a big boost to manufacturing,” he said.

Although Africa has a population of over a billion people, many of the individual country markets are too small for some manufacturers to be competitive. Business Daily reports that discussions are currently underway to unite three of the continent’s existing regional economic communities: The Southern African Development Community (SADC), the East African Community (EAC) and the Common Market for Eastern and Southern Africa (Comesa). This proposed free trade area would comprise 26 countries with a total population of 521 consumers. “One thing is that we have to export, the other thing is we need to grow our domestic economies. If [we] look at ourselves as individual countries, we are too small on our own, but as a bloc we start to crack the numbers,” said Davies.

Africa has abundant resources, from minerals to agricultural produce. Most of these are, however, exported for processing abroad. Davies said that Africa needs to add value to its raw materials through processing activities. According to him, most of the industrial developments on the continent have been in light industries such as textiles and food processing.

He gave the example of a proposed project in South Africa to process mineral sands into rare metals. Titanium sand sells for US$440 a ton; processed into titanium sponge it fetches $4,000 a ton and as an alloy, used in the aircraft industry, the price goes up to $100,000 a ton. The minister said that in addition to the large financial benefits of beneficiation, a project like this would also create thousands of jobs.

Davies explained that a trained workforce is crucial to boost industrial output. “We need to engage much more seriously on questions like training, and training which is much more closely related to industrial needs.”

“Certainly what we need . . . is an educated staff, said Hartmut Reinke, director for the Middle East, Turkey and Africa of US-based multinational DuPont.

“What we are looking for are certainly academically educated people who can run the site. You need accountants. You need customer service representatives. But you need also the people on the line that know what they do. They need to be able to read, to listen [and] to think about what they are doing to be productive.”

He said low wages is not necessarily enough to attract manufacturing firms to the continent. “It is not a question if the wages are low or high. They come as a calculation of productivity. If productivity is high, the wages are increasing. That is what we are seeing in China, the workers are participating in higher productivity. They are producing more in less time.” He noted that the wages for unproductive labour is normally lower.

A lot of work still needs to be done for the continent’s manufacturing sector to realise its full potential, but it is crucial to ensure that this happens. As Davies put it: Africa is at a critical moment in time where it needs to boost industrial development if it wants to turn its current growth spurt into sustainable development.