In the last five years a series of international restaurant franchises have opened in East Africa. American chains KFC, Naked Pizza and Subway; South African brands Big Square and Adega Restaurants, and UAE-owned Caramel Restaurant & Lounge are some that have launched in recent years. 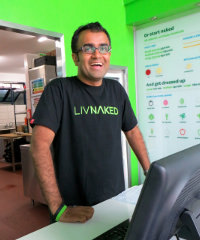 “We have a growing population and a growing economy, and everyone likes to eat. There is also an additional value with established food brands,” he says. “It’s clear globally that Africa is the place that everyone wants to be, and when you look at the high-performing regions… East Africa is one of the obvious ones. It has infrastructure, a growing population and sophisticated clientele.”

“So all the fundamentals are there and, from an international standpoint, it seems to be less risky and also simpler compared with other regions.”

Sticking to a proven concept

Gavin Bell is the general manager of Kuku Foods Kenya (franchise holder of KFC in East Africa). As chairman of the Kenya Franchise Association, Bell says he has spent long periods trying to get people to understand the essence of franchising.

“Many a times I felt I was banging my head against a brick wall. I felt no one was listening and couldn’t understand why,” says Bell. “But now the industry is growing rapidly and I can tell you many more brands are coming. Over the last year I have been involved with a lot of people who want to become franchisees.”

Brands that have entered the East African market seem to making progress. Subway has six stores in Dar es Salaam, Tanzania. In Kenya it has just opened its third store, with one more in the pipeline. American entrepreneur Christopher J. Bak tells How we made it in Africa his company, Liberty Eagle Holdings, which operates Subway stores in Kenya and Tanzania, is negotiating several leases for 2015 and there are plans to develop up to 20 outlets in the region.

Former investment banker Ritesh Doshi quit his job in London to bring Naked Pizza to Kenya. The first store opened in Nairobi two years ago and Doshi says the brand is “performing well”.

“Our food truck launched a few weeks ago and is doing well, and we are on the verge of opening our third outlet in a few days. We have also committed to one store next year and are currently negotiating three more sites.”

Bell explains that franchises are thriving in the region because customers trust established brands since they uphold high quality and food safety standards, have fair price points and maintain consistency across multiple outlets.

Doshi says he decided to become a franchisee, as opposed to starting his own brand, because he had no experience in the food and quick service restaurant industries.

“The choice was to spend a number of years learning the hard way, or getting up and running with a proven concept that could be adapted for the local market. I chose the latter.”

For Pakistani-born entrepreneur Sadiq Surya, a lack of knowledge and understanding of the Kenyan market prompted him to become a franchisee. After 22 years living in Dubai, he relocated to Nairobi and opened the South African franchise Adega Restaurants.

“I did have different restaurant ideas and concepts which I wanted to do here, but this is a new market for me, one that I wasn’t very familiar with. When you are in a new place, everything you are doing is already a big risk. You don’t know the taste of the people, for instance.

“So I decided to bring Adega which is a popular restaurant in South Africa. I had eaten at Adega before during my visits to Africa and enjoyed it. Plus it is not restrictive since they allow us to have variety of food, including poultry, seafood and beef,” explains Surya.

After 18 years in business, Samanani says Hoggers has the capability and knowledge to build its own brands. However that choice has a trade off because it involves committing to the lengthy process of educating the public to something completely new.

“In the interest of speed we sometimes choose to take on a brand that people already know. With our most recent acquisition, Ocean Basket, we identified that there was a gap in the seafood market with most outlets being either over-priced or too limited in their menu variety and quality,” he explains.

‘Not completely on your own’

Franchisees run a business based on the franchisor’s established operational methods. In return they pay royalties to the franchisor. Subway’s Bak explains that a franchisee gets access to a well-tested toolkit that helps them train staff, control in-store operations and communicate with customers.