Dubai is one of the world’s most popular business hubs with its state-of-the-art infrastructure. Over the last three decades the city has transformed from a desert into a technologically advanced business centre in the Middle East. 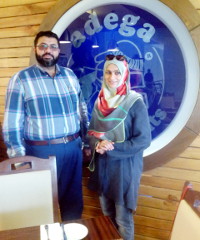 Entrepreneur Sadiq Surya lived in Dubai for 22 years but when he came to Kenya to visit his sister’s in-laws, he fell in love with the country’s weather and natural beauty. The Pakistani-born businessman decided to relocate to Nairobi to open the South African restaurant franchise Adega Restaurants.

Sadiq tells How we made it in Africa he first ventured into business at just 19 in the Pakistan real estate industry. He later moved to Dubai and was involved in the textile sector. During business trips in Zambia and South Africa he dined at Adega and always enjoyed his experience at the Portuguese chain.

He explains he brought the franchise to Kenya to cater for the country’s middle and upper-class families.

“I noticed that although the middle class was growing, there was a gap in the offerings available in the hospitality industry, especially for families. There was need for a decent outlet where families could dine. I am a father of six so know when a family dines out they want a place that offers good food, but also an area for kids to play. Parents also want a place where their children won’t be exposed to things such as alcohol and smoking.”

Although he noticed immense business opportunities in Africa during his travels, Sadiq and his wife Safyah say the good weather and friendliness of the people is what drew their hearts here. He felt that in Dubai his children “were living a concrete and luxurious life, but they were missing out on the experience of living in nature”.

“We have lived in the air conditioned world in the midst of tall buildings, but when we came here were attracted to the nature and its beauty. For the many years we lived in Dubai it would rain for a few hours every three years or so. It’s really a desert,” Safyah adds.

In June the couple opened Adega Restaurants at Nairobi’s high-income residential suburb, Lavington. Sadiq says the market has been positive due to the restaurant’s location and its wide variety of tastes and styles. “I chose Adega because it is not restrictive and allows us to have variety of foods including poultry, seafood and beef. Its taste also appeals to the palate of everyone.”

‘Opened one restaurant, could have opened eight’

Sadiq admits he faced difficulties setting up the business in Kenya and waited for over a year to open the first store.

“For me this restaurant is a small project compared to the kind of businesses I am used to doing. I could have opened eight restaurants in the time it took me to set this up. We were slowed down by permits, licences and other delays by authorities. Dubai is a success because unnecessary restrictions don’t exist, for instance, paperwork is done and completed in just 15 days.

“There was a point I was ready to cut my losses and leave. It took me one year and four months to get a work permit. I stuck to it because, with men, sometimes our ego won’t allow us to admit to failure. Succeeding here depends on how much patience and risk appetite you have. If you have the patience this is a good market because there are so many areas you could invest in.”

Sadiq explains that to open the restaurant he had to get no fewer than 16 different licences. Such tedious paperwork processes and excessive taxation, he says, turn off potential foreign investors.

According to Sadiq there is increasing interest among investors in the United Arab Emirates (UAE) to do business in Kenya and the rest of Africa, but some have come and left because of stumbling blocks that make doing business hard.

“The authorities here should be more welcoming to foreign investors. Someone once said investors are like pigeons. When you put food on the rooftop they come, but if you put one small firecracker they will never come back again. When an investor has one bad experience they might never return.”

“There are people with loads of money and they are really interested in opportunities here. There is so much opportunity here and sometimes I wonder if people are aware of it. My plea is that processes should be made easier to enable more foreign investment.

“The moment these stumbling blocks are removed, you can become the Dubai of Africa.”