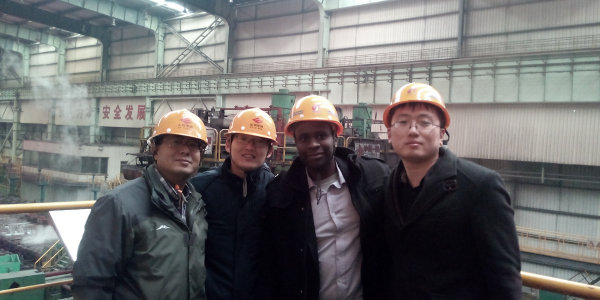 Walter Ruigu (third from the left) on a site visit to a Jinan (Shandong province) steel plant to inspect steel products for export to East Africa.

Six years ago Walter Ruigu travelled to Beijing for the first time. He was learning Chinese, so he figured it would make sense to go there. The Kenyan national had been interested in China for a while, even doing his Master’s degree thesis on China-Africa economic relations.

Since then, he has been working and living in Beijing running his own business – China Africa Merchants Advisors Limited (CAMAL). Ruigu started the trade and investment advisory firm after noticing a gap in the market.

“There were no Kenyan companies assisting African firms in China, and a very limited number of African firms were helping Chinese companies enter the Africa market,” recalls Ruigu.

Today CAMAL operates offices in China, Kenya and Zambia. It assists Chinese companies to secure commodities in Africa; while also handling the procurement of capital equipment and sourcing of financing in China for African companies.

When he first arrived in Beijing, Ruigu was impressed by the “amazing” infrastructure.

“That is what struck me,” he says. “I took the speed train from the airport to the city and it was quite impressive. Beijing is a constantly growing city.

“What I saw then and what exists today is very different. An example is the number of subway lines they have added – about ten to 15. So you can see the economic growth.”

Although he found the working environment to be different from Kenya, or for that matter the US and Europe where he spent his university years, Ruigu says he kept an open mind.

“In China there is respect for hard work. In terms of working with Chinese companies and individuals there is an optimism about the future.”

In his experience, age and race has not affected his work even though misperceptions about Africa still abound among the Chinese.

But he still misses certain things about Kenya, such as the clean air and local food. What most concerns him about living in Beijing is pollution. The city ranks among the most polluted in the world.

“China’s economy grew quite fast, so a lot of cars, factories and construction has led to pollution. But I think now that as the middle class is growing, the government is paying more attention. There are more steel mills being shut down. The government has a policy which doesn’t encourage two highs and one low – which is high pollution, high energy consuming and low value-added industries. So more of these industries have been moved out [of the city],” he explains.

Opportunities for African companies in China

Ruigu says there is increasing interest among Africans to visit China. He cites a recent case in Kenya, where the Chinese embassy was overwhelmed by visa queues and eventually decided to outsource its visa processing services. It is estimated 15,000 Kenyans travel to China every year.

“In Beijing most of the Africans are diplomats or students, but in Guangzhou you’ll bump into many African traders.”

Despite the opportunities it presents, Ruigu says African companies have not fully tapped into the Chinese market.

“I still think China is a mystery to most African investors… and actually to most people. With the exception of South Africa, there is quite little investment from Africa to China.

“Chinese shoppers are looking for things that are new. I have seen Kenyan branded tea in a Chinese supermarket written in Chinese. The issue is that African companies have not taken the initiative to try and penetrate the Chinese market.”

“I would suggest people definitely look at China, see what it’s doing and the opportunities there. Go there for a week… you’ll be surprised at what you see.”