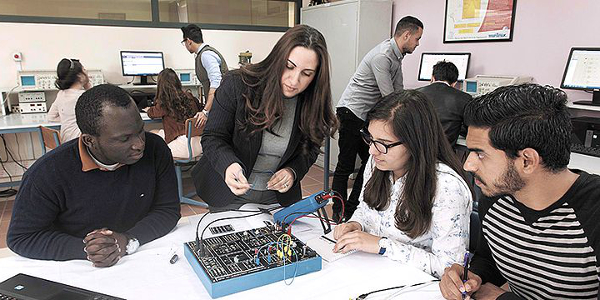 The African continent has a large number of young people, with the United Nations estimating about 40% of the population is under the age of 15. However, in many countries the public sector has not been able to adequately keep up with demand for education. Generally speaking there is also a mismatch between graduates’ skills and what is required by employers.

This situation has created fertile ground for growth in the private education industry. For instance, Johannesburg Stock Exchange-listed ADvTECH has built a diversified company with numerous basic and tertiary education brands, while its fellow South African operator Curro, which manages dozens of independent schools, is now eyeing the private university market as a growth opportunity. One of East Africa’s top players is Mount Kenya University, founded by entrepreneur Simon Gicharu (read our interview), which, in addition to a number of campuses in Kenya, has also expanded to Rwanda and Somaliland. And on the other side of the continent, Ghana’s International Community School, with three main campuses, recently attracted investment from private equity firm AfricInvest.

In addition to brick-and-mortar institutions, there are also numerous online education providers, such as The Virtual University of Uganda, which has attracted foreign students from Burundi, the Democratic Republic of Congo, Rwanda, Somalia and South Sudan.

One of the latest entrants into the continent’s private education sector is Actis, a UK-based emerging markets-focused private equity firm. Recently, at a launch event in London, it announced its pan-African higher education initiative, Honoris United Universities.

In 2014 Actis started investing in universities in North and Southern Africa, and has now, three years and US$275m later, brought them all together under the Honoris brand. The institutions are: Académie d’Art de Carthage, Université Centrale and IMSET from Tunisia; Université Mundiapolis and EMSI from Morocco; and MANCOSA and REGENT Business School from South Africa. These seven universities have a combined 48 campuses, with 27,000 enrolled students.

At the core of the initiative is a concept called “collaborative intelligence”: the sharing of knowledge and cultures between the various universities in the Honoris network, thereby giving students a pan-African, multi-cultural academic experience.

Based on insights from its numerous other investments in Africa, Actis believes that companies increasingly have a regional focus and are seeking employees with the ability to operate throughout the continent.

“Employers need graduates that are not only educated to international quality standards, but who have the actual ability to operate in Africa. Ivory tower academics is simply not enough,” commented Rick Philips, a partner at Actis.

“The graduates that are going to win are those that are mobile, are agile and have this capability of working across borders, across languages, across cultures, [across] religions, and capturing the full diversity and power of Africa, and harnessing that to deliver for their employers,” he added.

Philips highlighted a number of trends he believes will drive the private education industry in Africa.

“Secondly, of Africa’s one billion people – half have not even reached university age yet. There is a huge tide, a demographic driver, about to arrive and demand more quality education. However, only about 10% of Africans actually get any form of tertiary education.

“Thirdly, with the growth of urbanisation and the growth of the middle class in Africa, more families than ever before have the financial ability to consider an investment in education… And whether it is families in Nairobi or Lagos or Cape Town or Cairo – those families realise that the… most important investment they can make is to invest in quality education for their children.”

He added that due to changing attitudes in many African societies, a growing number of women are entering the workplace, and therefore demanding appropriate education. “I would say there has never been a better time in Africa for girls to seize opportunities that were never available to their mothers.”

The continent’s private education space is attracting strong interest from investors. “It is easy to get investors. I think I must get once a month, on average, a solicitation for investment,” commented Amine Bensaid, president of Morocco’s Université Mundiapolis, who was also participating in the launch event.

Some stockholders have already been healthily rewarded. Since listing on the JSE in June 2011, Curro’s share price has increased by over 300%. Early investors in rival ADvTECH have also done well, with the value of its stock up over 1,850% from its bourse debut in 2004. Another success story is GetSmarter, a Cape Town-based company delivering online courses from some of the world top universities, which was recently acquired for $103m by Nasdaq-listed 2U.

Venture capital investors have also gotten in on the action by backing young edtech companies. For example, CRE Venture Capital has invested in Nigeria’s Prepclass, which provides learners with materials to prepare for tests; Savannah Fund has bought a stake in Kenya-based mobile educational content platform Eneza Education; and AngelHub Ventures owns part of Snapplify, a distributor of e-learning content in South Africa and beyond.

Because it is a private equity firm, Actis has to sell (or exit) its investment at some stage, but first wants to grow the network. “As an investment we will hand over at a certain point of time to the next group of investors that will take it to the next level,” said Hichem Omezzine, co-lead for global education at Actis, at the launch event.

“Private education networks have a unique role to play in providing graduates with a competitive advantage in cross-border markets – competencies and life skills that will be in equal demand by multinationals and by small and medium enterprises. The reliance on traditional models and the transition to African-specific educational solutions – alongside academic excellence – can power a new generation of African leaders and professionals,” noted Omezzine, in an earlier opinion piece.