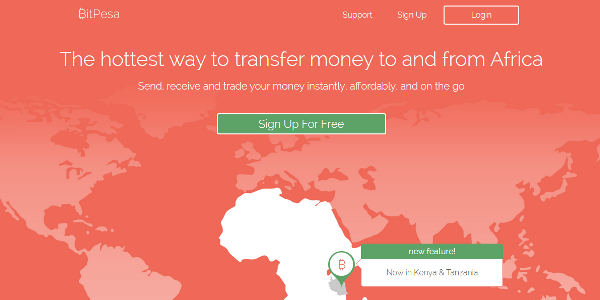 Sub-Saharan Africa is the most expensive region to send money to according to the World Bank, with high transactions costs eating into billions of dollars that could otherwise go to recipients in the continent. But local businesses are attempting to disrupt the remittance market using technologies like digital currency Bitcoin.

One such company is BitPesa, a Nairobi-based digital currency exchange and money transfer service provider with operations in Kenya and Tanzania. Established in 2013 by US-born microfinance expert Elizabeth Rossiello, BitPesa also seeks to spur cross-border trading and growth of SMEs by offering businesses an alternative way of accepting payments. Through BitPesa, users in Kenya and Tanzania can receive Bitcoin from nearly anywhere in the world and exchange it instantly to local currency via mobile money platforms. The company charges a transaction fee of 3%. Earlier this year BitPesa raised $1.1m from a group of investors.

Rossiello speaks to Dinfin Mulupi about BitPesa, and the impact Bitcoin could have in Africa. Below are edited excerpts.

What has been the market reaction since the launch of BitPesa in 2013?

We’ve seen a huge uptake in Kenya. People are using BitPesa to get their salary payments, building their businesses and sending money to relatives. We don’t talk publically about our volumes, but we have been growing 30% or more per month.

We have just launched in Tanzania which is a really promising market. Although it is not a $1bn remittance market like Kenya, it is not too far off. Mobile money penetration is quite high and the concept of using mobile money is pervasive, especially in trading hubs such as Dar es Salaam and Arusha. Financial services in Tanzania are expensive and moving money in and out of the country is very expensive – so for us it was quite easy to start doing pre-marketing and launch there. Both Kenya and Tanzania are quite receptive to financial innovation, which is exciting. We have also incorporated in Uganda and Nigeria, so those will be our next two markets to launch.

In our expansion we look for markets that don’t have a lot of competition, where local bank transfer rates are quite high and money transfer in and out is also high. We went to Arusha (Tanzania), for instance, because there are a lot of safari companies there. A lot of people there are looking to accept payment from their customers abroad. An independent tour driver can now, for instance, use our service to be paid his deposit by tourists based in Sweden. We want to open up trading and make it easier for small businesses to thrive, do business outside their country, and get paid easily.

Africa is experiencing a surge in Bitcoin-related activity with dedicated conferences, more companies setting up, investors funding start-ups and even Bitcoin ATMs. What impact will Bitcoin have in the continent?

We just went to the Kenya USA Diaspora Sacco Conference in Texas to demonstrate what we do and people were exited to know they won’t have to pay huge amounts to send money home. A junior high school student in the US can now do a cupcake sale and send the money to relatives in Kenya without going through a third-party organisation. Global charity BitGive recently collected donations globally through BitPesa to build water wells in western Kenya. Some of the money was paid as Bitcoin directly to service providers and the whole project was handled quickly, efficiently and in a transparent manner with every coin accounted for.

So there are many ways we can use the Bitcoin technology to transform how different sectors operate. It might appear complicated, but Bitcoin really is like mobile money but international. Over the last 18 months it has become easier to buy Bitcoin, and there are now more exchanges that let people pay with mobile money or cash, and get Bitcoin.

We are excited to see more companies jump in and join the ecosystem but we hope everybody takes this seriously. If you are going to be creating a financial product, you need to follow financial regulation. We saw a similar trend with the micro-finance bubble, where a lot of people joined the industry. Some were taking savings on people’s behalf but they were irresponsible with those savings. So industry players ought to be careful.

Well [Kenya to Tanzania mobile money transfer] is only one corridor, and it took a long time for that to open. Cross-country mobile money transfer is not global. You can’t do mobile money from Sweden to Kenya or Canada to Kenya. I think there is going to be a lot of competition in money transfer moving forward. For a while, there was not a lot of financial innovation in the cross-border payment and money transfer business. But there have been a number of entrants from just about the time I got in, or shortly after. So this is an evolving space and you will see much more happening. We are excited because we are a first mover.

Describe some of the challenges you have faced running the business.

Right now there is a huge supportive community for this technology in North America and Europe. So funding and assistance in consulting and partnerships requires a lot of travel. I wish there was a direct flight to North America. What we are trying to do is stay here more and build the ecosystem here. We have had visits from some of the big global companies, and Kenya is now getting on the map in digital currency technology. But it’s taken a lot of travel to persuade people to see what we are doing, and it has been exhausting.

We have learnt a lot. You shouldn’t be scared just because you are going into a space that has some really big players and you are like a very small mosquito. Instead put your head down and build a great product, give great customer service and just keep going. Our motto is to make sure we understand the environment, but not to get scared by all the very big incumbents. It is also important to understand and adhere to regulatory and legal requirements.

We tried to differentiate from everyone else by taking this extremely seriously right from the beginning. We have licensing applications in three jurisdictions and we follow global best practices which are stringent. We just hired a very senior compliance and anti-money laundering expert who graduated from Harvard and worked for seven years at a prestigious law firm.

The lack of women in the Bitcoin industry has been a hot topic in recent months. Tell us about your experiences.

When I go to conferences I always see more men, but it is something I have learnt to deal with. I came from finance where I always had trouble finding women and went into micro-finance which is often dominated by women, except at the top. There are women in Bitcoin but you have to actively seek them. In fact my company is led by women. Four of our top five first staff members and management team are women and that just happens to be because I knew a lot of strong women.

From the beginning we have actively sought to hire female engineers. You can’t just say there are no women engineers or no women in Bitcoin. If you want to ensure women make up majority or even half your team, you have to actively seek them.