Earlier this year, I received some lessons on what wins in frontier markets from former Coca Cola CEO Neville Isdell. “Young markets need a long investment horizon,” Neville told me. “US companies, in general, don’t have the long-term view that they need. If a US CEO says he or she’s building something for twenty-five years from now, an investor is likely to say ‘Oh, come on. I’m not going to invest in that. You’re wasting my money’.” 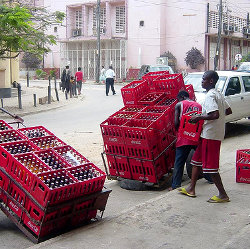 Coca Cola has a long-term outlook on frontier markets such as Africa.

I interviewed Neville for a forthcoming book on success in Africa. He’s a firm believer that many US firms struggle in frontier markets because they’re compelled to a short term view. And Neville knows frontier markets. Raised in Zambia since the age of ten, he attended the University of Cape Town in South Africa, then returned to Zambia and joined the local Coke bottler at age twenty-three. He assumed leadership of Coca-Cola’s large South Africa operation eight years later, before taking on leadership positions worldwide and the CEO job in in 2004. In 2008 he was named by Beverage Industry magazine as the sector’s CEO of the year. Under Neville’s successor Muhtar Kent, Coke today generates 47% of volume and 33% of income from three emerging and frontier regions: Latin America, Eurasia and Africa.

I asked Neville how he convinced shareholders to take those long-term bets at Coca-Cola. “Well, having shareholders like Warren Buffet helps,” he said. “Warren looks for long-term value, so he shared this view. Also as a company we have seen this everywhere, so we expect it.”

Not every company enjoys that long-term commitment, even in sectors where it’s most necessary to success. In the mining sector this year, multiple boards have pulled back from long-term capital investment plans. They’ve often done so under pressure from investors. In describing why the $10 billion Blackrock World Mining Fund was reducing by up to a third its stake in mining industry leader BHP Billiton, one of the fund’s managers put the challenge quite plainly: “Some of their decisions are very good in terms of long-term strategy, but are you going to make money from it in the next three years, which is our investment horizon?” It’s a reasonable position, but one that compels hard discussions.

Across sectors, shareholder investment horizons preclude some frontier market investments and require other investments to be staggered so the company can continue to return cash to investors even as it pursues those opportunities. Companies that succeed, like Coke, have the experience to make a realistic assessment of the constraints of frontier markets and the anticipated timing of returns. That’s a conversation they have with shareholders and with stakeholders in their operating countries on a continuous basis.

Any comparison across sectors has to carry a caveat, and the distance from commodity production to beverages is about as wide as it gets. Yet, there’s irony and learning in seeing how Coke, a leader in fast moving consumer goods, socialises its shareholders and key stakeholders to success over the long-term. It’s a posture reflected in the recent election to the Coke board of Helene Gayle, CEO of the non-governmental organisation CARE. Gayle is a non-traditional choice, but she is widely respected among her peers for vision on challenges which can take a generation to address and which undergird growth in the frontier markets of Latin America, Asia and Africa.

Frontier markets experience fast growth, but they’re no fast buck. As corporate boards turn to frontier markets for more growth, they will be well advised to follow Coke’s lead. From silver miners to soda bottlers, it is those companies that will prevail in young markets.

* Jonathan Berman is an author and advisor to Fortune 500 companies and investors operating in frontier markets. His views on frontier markets have appeared in the New York Times, Financial Times and Wall Street Journal’s CFO ledger. His first book, ‘Success in Africa’, will be published in 2013 and you can follow him on Twitter at @Jonathan_Berman.