The winning of the World Cup Soccer bid way back in 2004 created a challenge to prepare the country for hosting such an august event in 2010.

Along the way, South Africa incurred costs but also created opportunities for itself. Without the stimulus of the forthcoming event, such costs would probably not have been incurred nor the opportunities eventually harvested. 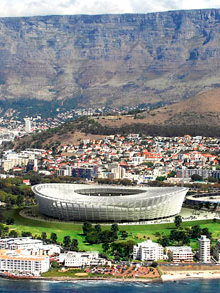 Existing sport stadia had to be upgraded or new ones build to the most exacting standards. In the process, architectural and engineering challenges were created to showcase the country and its abilities to the greatest possible extent and advantage.

Simultaneously there had to be a general infrastructure upgrading. The many soccer stadia around the country could not be seen to be functioning in isolation.

Airports, roads, hotels were to be calling cards for the hundreds of thousands of soccer fans expected to flock to the country for a month of soccer in 2010, while billions worldwide would watch on television, for the first time getting a glimpse about South Africa that might form the basis for future visits to the country, the region, even the continent.

The construction industry was the main beneficiary of the stadia expenditure, the airports, the road upgradings, the Gautrain, and the new hotels being built, spread over a number of years between 2005 and 2010 and easily approaching R100 billion (US$13.2 billion) overall.

But the growth impulse went much wider than this, for the government effectively challenged the public sector in a much wider context to start upgrading and expanding its infrastructure, covering harbours, export railway lines, national and municipal roads, power stations, telecommunication facilities and much more.

Much of this additional spending was not directly linked to the World Cup, but its onset was linked to a change in perceptions as to what the country needed to be better prepared to face the future.

Thus in the long preparation phase eventually culminating in the World Cup kick-off in June 2010, much spending was incurred and benefit gained from so much effort, and work created.

The next stage is the actual holding of the World Cup, a month long extravaganza where many national soccer teams will be competing for the ultimate honour, in many cases in front of audiences holding many of their home fans who have specially traveled here, and certainly in front of their home television audiences.

All these participating audiences and their South African hosts will be spending billions on air travel, hotel nights, rental cars and many forms of entertainment.

It is estimated that during 2010, World Cup related expenditures could add as much as 0.2% to 0.4% to the country’s GDP (both as production and as income).

Throughout the buildup period, thousands of construction jobs were created, while the new facilities need to be manned, creating different job opportunities, many permanent.

The third stage will be the post-World Cup phase stretching indefinitely into the future.

Depending on the impressions South Africa has created, directly to foreign soccer fans, and indirectly to the billions of watching television fans, it can expect a long dividend of many additional visitors to this country over many years, as repeat visits or to try it out for themselves, as tourists, for business or as students.

To put a value tag on all these various benefits flowing from hosting the World Cup is virtually impossible.

But that the World Cup will put South Africa, and Africa, on the map is for sure, with many having benefited from having presented, hosted or participated in this huge world class event.