At 35, Ken Njoroge is running one of the most respected mid-sized companies in Kenya. 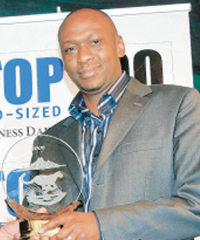 Cellulant, a mobile commerce company that manages, delivers and bills for digital content and commerce services actualised over telecom networks, has received various recognitions. These include being ranked as one of the Top 11 SMEs in eastern Africa in 2007 and the leading business in the KPMG-sponsored Kenya Top 100 mid-sized companies survey.

The company, which was established in 2004, has served over six million subscribers across Africa and intends to penetrate 25 countries on the continent by 2012.

Njoroge explains that before he was bitten by the “computer bug”, he studied pharmacy at the University of Nairobi. He, however, developed a passion for computers prompting him to drop out of his studies, much to his family’s disappointment. Njoroge decided to pursue computing and later graduated from Strathmore University with a degree in information systems management.

After one and a half of years of employment, Njoroge, then aged 23, quit to partner with two friends and started 3mice, a web development firm.

“In 2004 when I met a Nigerian friend named Bolaji Akinboro, another pharmacist who had abandoned the [profession] for business technology, I talked to him about helping us to set up 3mice in Nigeria,” he says.

At the time Njoroge and Akinboro, however, realised that mobile telephony was growing fast in Africa and the idea for Cellulant was born.

He notes that after making a presentation to Uganda Telecom, the two discovered their idea was viable and decided to register the company as fast as possible.

“We weighed the options and [learned] it would take us at least three months to incorporate the company in Uganda, Kenya or Nigeria. We, however, realised it would cost us less time in the United Kingdom. We [then] went ahead and incorporated Cellulant in the UK,” says Njoroge.

On their first day of selling ringtones in Kenya, Njoroge recounts that they sold over 16,000 ringtones at a cost of Ksh.75 each. During its first year Cellulant made approximately Ksh.60,000 per month and in 2007 the firm turned profitable.

Cellulant started with only two employees, Njoroge and Bolaji, and today it has a team of over 90 people across the countries in which it operates.

“We have always believed that all services we see on the internet will move into the mobile environment in one form or another. To this effect we provide mobile content, mobile money and mobile business services,” he says.

According to Njoroge, Cellulant will soon be unveiling a new product dubbed Lipuka.

“Lipuka will be a one-stop shop providing a convenient platform for most services like banking and payment of bills [through] mobile phones. It will offer different services on a single mobile device platform like fetching your bills and making payments to your bank,” he says.

“With the success of mobile money transfer service M-Pesa, and with banks finally realising the [potential of] mobile banking and the need to remain competitive, we are positioning ourselves to exploit the opportunities that come with the change of trends.”

He reckons that the best time to get into business is at a young age since the process of building a successful company takes time. “Young people are energetic and easily learn new things. Their mistakes can easily be forgiven by established businesses due to their age,” he says.

A firm believer in the power of young people, Njoroge reckons that employees of Cellulant have an average age of 35, the oldest employee is around 39.

“In ICT where things keep changing we need innovative young people, with fresh ideas, who take on new ideas with optimism, unwavering determination and energy,” he explains.

Going forward, Njoroge intends to make Cellulant a household name as well as be listed on the Nairobi Stock Exchange in the near future.