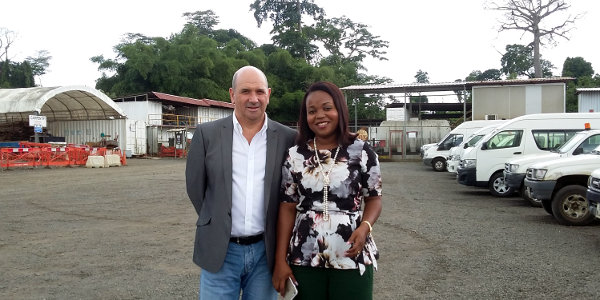 The roads are quiet as we drive through Equatorial Guinea’s capital Malabo. Today is the start of the election campaign and most people took the day off. I’m on my way to meet Marisol Nchama and Tony Meakin, the wife-and-husband team who run Elite Construcciones. It was suggested that I go and speak to them as they have some interesting entrepreneurship experiences to share.

Tony, who was born in the UK, first came to Equatorial Guinea in 1997, doing work in the oil and gas sector where he met Marisol, an Equatoguinean. He later ended up at a company called SOGECO. The owners of SOGECO eventually decided to pull out of the hydrocarbons side of business. However, Marisol and Tony saw an opportunity to approach SOGECO’s existing clients and start their own construction company focusing on the oil and gas sector. So in 2012 they officially launched Elite Construcciones. Today it is involved in a variety of fields – from actual construction to equipment and labour supply.

Despite starting with a number of clients already in the bag, Marisol and Tony had to overcome numerous hurdles to grow the company into what it is today. “It’s like any business, you have to be prepared to be knocked on your arse and get up again. No business is easy. We work very hard. There is no such thing as 9-to-5,” says Tony.

“We started from zero and had to build everything ourselves. Granted, we started out with some clients, but we still had to prove to them that we could do the job.”

A current challenge is the low oil price. Over the last two years the price of crude has plummeted from over $100 a barrel to less than $30, and is currently hovering at around $50. Equatorial Guinea’s economy is mostly based on the oil and gas sector, which also accounts for the bulk of Elite’s clients.

“Our actual construction work has flatlined. There is no construction work on the oil side of things. None of the oil companies are spending money. Luckily we still have our labour supply business, which keeps us going, and we have also diversified outside of the oil sector. But hopefully the oil price will recover,” notes Tony.

Securing the initial financing for Elite was another hurdle. According to Tony, banks in Equatorial Guinea are generally reluctant to lend to domestic players. “The local companies don’t get the same respect from the banks as a Spanish or South African company, for instance. We can’t go to a bank in Europe and borrow money there, because no one is going to lend to us. We can only borrow in Equatorial Guinea, and if the banks don’t want to lend to you, how are you going to build a company?”

They both agree that Equatorial Guinea offers numerous untapped opportunities for investors who have the required capital. “Equatorial Guinea doesn’t just have oil. It has got mineral reserves, it has beautiful coastlines – the place could be a goldmine,” says Tony, also highlighting potential in manufacturing and retail.

According to Marisol and Tony, external perceptions of Equatorial Guinea are not always accurate, and prospective businesspeople need to visit and connect with the right local private companies.

“Sometimes outside people have the wrong idea about the country, thinking, ‘Oh EG is this, EG is that – you can’t do this, you can’t do that.’ But people need to come and see the country for themselves and meet the right people – people who have already implemented their own business ideas. Talk to them, and then you can decide for yourself,” notes Marisol.

That said, investors shouldn’t assume overnight success. “People often expect to make money from day one here. In Europe a company starts making money after three years – not the first three minutes. It is no different here,” explains Tony.

Before it started producing oil in the 1990s, Equatorial Guinea was one of the world’s poorest nations. Despite numerous ongoing challenges, Tony says the country has come a long way, especially in terms of infrastructure development.

“When I first came here, the airport was a tin shed. The airport road was like a dirt track. So when you think about how much has been done in the last 20 years, it really is unbelievable.”

Elite’s offices are situated next to the airport, where a Chinese contractor is currently building a new airport terminal, which is expected to eventually position Malabo as an air transit hub for the region. On my flights into and out of the country I was also struck by the large Chinese contingent on board.

Says Tony: “The Chinese are smart businesspeople and they know where to go to make money. Look at where the Chinese are here – they’re everywhere. This place has endless potential.”