So fighting against corruption gets its rewards. From Nigeria to Tanzania, we are seeing new presidents win score improvements in Transparency International’s latest Corruption Perceptions Index survey. Even South Africa has improved, which we think is a positive reward for the exposure of corruption, and South Africa’s institutions being strong enough to push back against the tide of corruption.

Corruption should be largely priced to the price of equities (not Eurobonds so much), so it is the change in the corruption scores, rather than the actual rank that interests us most.

Africa has winners and losers. Buhari in Nigeria and Magafuli in Tanzania have won their countries a two-point score improvement through their focus on anti-corruption. We said in May 2015 that Nigeria would have done a very impressive job if Nigeria’s score could rise by nine points over Buhari’s term in office. The improvement by two points in one year is consistent with that. Ivory Coast, which we praised for its macro in a report earlier this month, also comes out well. Angola is a surprise to us, but the country still has the worst rank among the African countries we look at. We are surprised that Kenya’s score has improved given some of the anecdotal noise we have heard.

Ghana’s score fell the most, which again is not a surprise given what we were hearing when we were in Accra two weeks ago. But the new government is promising a clean sweep and Ghana may improve its score in 2017.  We don’t have an explanation for why Egypt’s score has fallen two points. 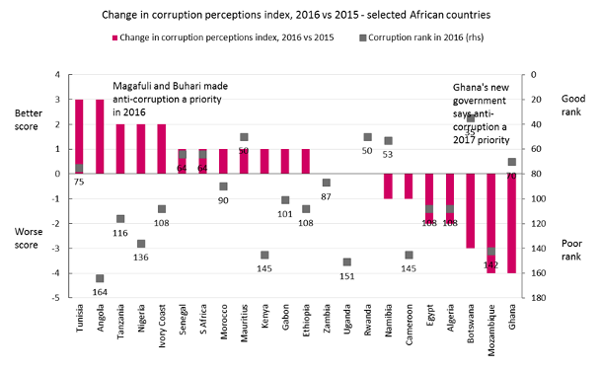 In emerging markets, Xi’s anti-corruption campaign wins China the most improved score among MSCI Emerging Market (EM) countries. We see two factors driving this. First, it helps Xi get rid of his enemies. Secondly, China’s per capita GDP is approaching levels where the middle class begins to demand less corruption.

The negative changes are most obvious in Mexico – where a corruption scandal surrounds the president (but unlike Brazil has not produced a change of leader) – and Qatar. 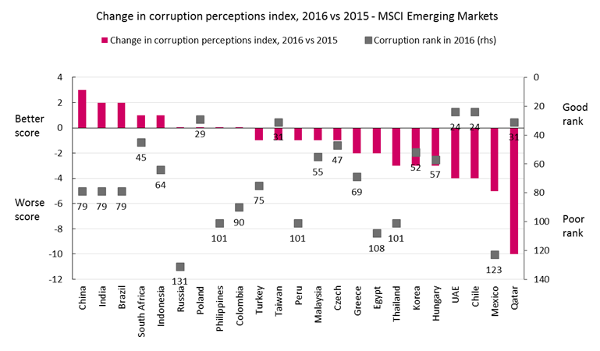 Gulf countries have seen the biggest score falls in this new survey, with Qatar dropping the most in the world. We think two factors are driving this. First, the inclusion of “The Varieties of Democracy Project (VDP)” appears to be responsible for four points of the 10-point worsening in Qatar’s score (we have not looked into this VDP data before, but headline numbers look odd as they give the US a score of 69, Myanmar gets 50, Belarus gets 46, Qatar gets a score of 39, Turkey gets 36, Russia gets 18). Second, IHS Global Insights has drastically cut their scores for Gulf countries (e.g. Qatar went from 83/100 to 47/100) – we suspect this drives much of the other six-point shift. It appears Transparency International is paying increasing attention to democracy rather than just corruption with these changes. We think this is unfortunate. We already have plenty of surveys on democracy – we don’t see the value of adding that component into this anti-corruption survey. 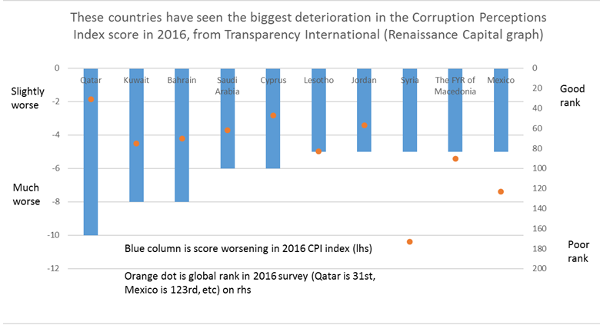 For frontier bulls, it is encouraging to see most countries getting better, led by Argentina and then Tunisia. We see decent two-point score improvements in Vietnam (helped by the change of premier?), Romania (but they will struggle to sustain this unless the president wins his battle with the newly elected PSD government over freeing people arrested for corruption), Pakistan and Nigeria.  Georgia, which we label “beyond frontier” is the best of the bunch. 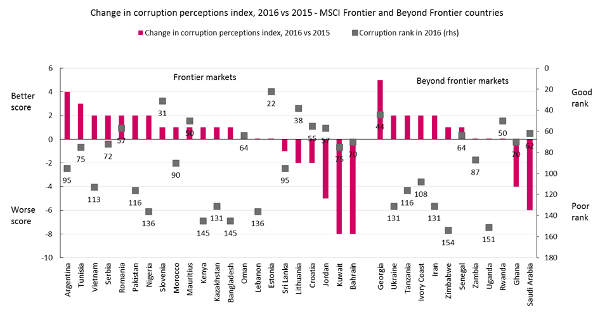 Lastly, who are the big winners in the 2016 survey? Belarus (really??), Georgia, Laos, and Argentina. But North Korea? Give me strength. 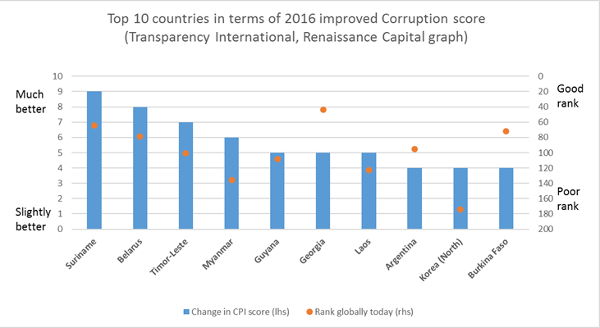 It is good to see the new corruption survey rewards countries for exposing corruption – from Brazil to Nigeria. We are less convinced by methodological changes that seem to broaden the corruption survey to include a greater focus on democracy, which implies a worsening in Gulf scores that may not reflect any worsening in corruption on the ground. We think reducing corruption does support improved equity prices, because it increases the confidence investors have in the legal system which can be needed to support minority investor rights.