Accurate market data is often hard to come by in many African countries. The dominance of the informal economy means much activity takes place beneath the radar and outside of the formal tax net. 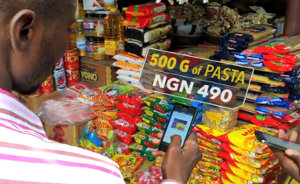 Standard Chartered has signed up more than 350 people, each equipped with a smartphone, who take pictures of product price tags.

This information dearth is especially true for price data, as most products are sold via informal channels.

In an effort to overcome this challenge, Standard Chartered bank has partnered with data company Premise to introduce an innovative consumer price tracker initiative in Nigeria.

It works as follows: the bank has signed up more than 350 people, each equipped with a smartphone, who take pictures of product price tags in shops and markets. In cases where prices are not displayed, they are entered manually. This information is then uploaded to a central database from where it can be analysed. The ‘researchers’ are compensated through top-up mobile phone credits.

This allows for real-time insights into price trends, much sooner than is likely from any other source. For example, the tracker will quickly pick up when the price of fruit is rising or falling.

Initially only price data for a few food staples will be tracked, with a specific focus on the cities of Lagos and Kano. However, there are plans to expand into other product categories and cities.

The initiative is still fairly new and only data for August and September is available. But from the early findings we know the following:

She expects both policy makers and investors to benefit from the price tracker. A lack of accurate and timely data complicates decision making in government. With better information, policy makers are expected to better respond to emerging price pressures.

The private sector will also benefit from better data. For example, quickly picking up on a shortage of sugar in Lagos, may lead to an early supply response from producers, limiting potentially damaging price increases as a result of shortages.

According to Khan, rapid GDP growth and increasing investor interest in Africa have highlighted the extent of the persistent data gap. “Until now, the publication of high-frequency data for key African economies has not kept pace with expanding investor interest. We attempt to bridge this gap.”