On August 26th, coffee gurus will descend upon one African country for the third time in four years. As expert judges for the prestigious “Cup of Excellence,” one of the world’s most established specialty coffee competitions held in 12 countries around the world, with only two in Africa, they will come to ‘slurp’ their way to the best coffee in the nation.

No, they won’t be coming to Kenya, or even Ethiopia – both renowned for their coffee. They’re coming to Rwanda.

In only a decade, Rwanda has transformed from an average C-grade market coffee producing country into one gaining significant traction in the global market for specialty coffee. Rwanda is increasingly becoming known as an up-and-coming destination for specialty coffee, with its mellow beans making their way into the world’s leading specialty roasters and coffee houses.

Today, nearly 27% of Rwandan coffee exported is marked as ‘specialty’ – up from literally zero in 2000. The country’s coffee is being picked up on the international market by everyone, including Starbucks, Green Mountain Coffee Roasters, Intelligentsia Coffee and Tea, and many others, resulting in a considerable increase in profits per kilo.

“[Coffee] is one of the most complex beverages out there”, Sarah Kluth, a buyer from Chicago-based specialty roaster Intelligentsia Coffee & Tea, which buys Rwandan specialty coffee, told How we made it in Africa. “There are about 900 different compounds in a cup of coffee that affect how we perceive it.” Like grapes and wine, coffee beans are extremely sensitive, and meticulous attention needs to be paid during the entire process – from cherry to roasting – to produce specialty quality.

To be marked as ‘specialty’, freshly-picked coffee cherries must be fully-washed, score above 85 points by expertly trained coffee ‘cuppers’, and be traceable to their exact origin. Regular, or ‘ordinary’ coffee, is traditionally depulped and dried at the home level, and sold in bulk to middlemen as parchment.

Rwanda, aptly dubbed the “land of a thousand hills” for its endless rolling green landscapes, is an exceptional place to grow coffee. It has ideal altitudes, perfect rainfall, rich volcanic soils, and an abundant labour force. Seventy-one per cent of adults in the country are engaged in subsistence or unpaid farming, and over 60% of the country is still living in poverty.

Although specialty coffee makes up just 3% of the global coffee market, its buyers and customers are demanding – and that demand comes at a price. Specialty coffee commands an additional 15% to 25% premium on top of current market prices.

For a tiny, landlocked and resource-poor country like Rwanda and its 400,000 coffee farmers, these premiums can, and have, made a big difference. With the highest population density on continent, where Rwanda has been unable to produce quantity, it has turned its focus towards quality, and a growth in small coffee cooperatives is helping put money in the hands of farmers who need it. 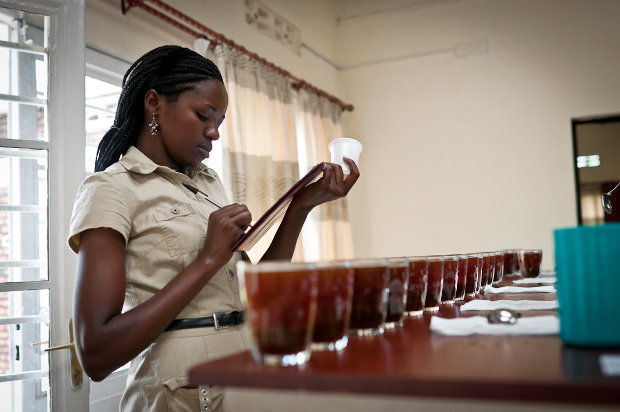 Laetitia Mukandahiro (28) is one of Rwanda's top cuppers (tasters). Here she is cupping the best of Rwandan coffee to be selected for the Cup of Excellence. Photo: Jonathan Kalan

Though coffee has always been a staple export in Rwanda, the country was never a player in the specialty coffee market – until recently. Before the 1994 genocide, coffee was a fledgling state-owned industry. After that there was little infrastructure or human knowledge capital to help revive it.

Ruzigama Christian (48), a small coffee farmer and manager of the Cyarumbo Washing Station in southern Rwanda, part of Maraba Coffee Cooperative, which produces the most well-known brand of local specialty coffee called Café de Maraba, says “there was a big problem, coffee prices were very low in 1999 because of the genocide.”

“What I earned before was like 20% of what I have now,” he says of his income since becoming a member of the cooperative in 2001.

The turnaround in quality has come through the work of several international development projects, such as USAID-funded PEARL and SPREAD, which in 2000 worked to kick-start a specialty coffee industry by building new coffee washing stations, organising farmers into cooperatives, and training local farmers, cuppers, and agronomists on quality. From there, the coffee industry began to blossom.

Government efforts followed shortly after when OCIR-Café, a government agency focusing on the coffee industry since 1964 shifted its attention towards specialty coffee, training farmers and building up a comprehensive extension network for coffee farmers. Eventually OCIR-Café morphed into the National Agriculture Export Development Board in 2011.

As a result of these private, public and government efforts, Gilbert says, “The quality of coffee, in the end, was outstanding. That’s what has made clients come back – because we are giving consistency.”

Rwanda may be a new player in the specialty coffee arena compared to the older markets like Kenya and Ethiopia. Yet according to Sherri Johnson, the head judge for Rwanda’s Cup of Excellence this year, this is an advantage. “What Rwanda has is an open book as far as incorporating good qualities for production, processing and marketing, growth potential, and ability to incorporate new systems.” The country has come a long way in a short time, and the future for specialty coffee looks promising.