It is safe to say that the majority of teenagers don’t spend much time figuring out how to scale a business or mulling over ideas to uplift their communities. 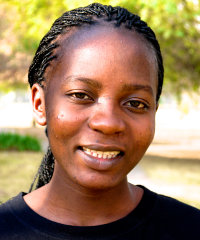 However, Laetitia Mukungu is not your average 17-year-old. At the age of 14, her passion for agriculture and education drove her to start the Women’s Rabbit Association in the remote village of Bukura in Kenya.

Mukungu launched the rabbit breeding project to support local women in the village. Each of the women who work on the rabbit farm receive a small salary and free farming inputs such as seeds. The project also supports their children’s education with school uniforms and stationery.

To get the project off the ground, she convinced a local school to invest KSh. 40,000 (US$460) to help purchase the first set of rabbits.

According to Mukungu there is a growing demand for rabbit meat in Kenya, especially from hotels and restaurants in Nairobi. Kenya’s capital is currently experiencing significant growth in the hospitality industry, fuelled by a rising local middle class and strong foreign investor interest. Rabbit is generally considered to be a healthy source of protein that has lower levels of cholesterol than many other meats.

Rabbits have a short gestation period of a month and can produce dozens of kittens a year. Mukungu says rabbits are also relatively cheap to raise due to the fact that they eat grass which is readily available in the village.

Another benefit is that almost every part of the rabbit has value. “In addition to the meat, the fur can be used to make winter clothing, the manure as fertiliser, and the rabbits’ urine can be used as an organic pesticide. So I thought rabbits are a better animal to rear as opposed to chickens or cows, like most of the people in my village do.”

Last year Mukungu was one of the 12 finalists in the The Anzisha Prize, a youth entrepreneurship competition. The prize opened a lot of doors for her and she has since been invited to speak at a number of international conferences. “It had granted me a bit of media attention, and it has enabled me to get funding for my project.”

Mukungu is currently a final year student at the African Leadership Academy in South Africa. While she is away two managers and her mother are looking after the rabbit farm. She says the women also have an interest in keeping the project afloat. “They will do everything to ensure that it keeps running, because if it goes down they will be the ones affected. So I make them part of the project.”

Mukungu is actively looking at expanding her business. She says local producers cannot keep up with the demand for rabbit meat.

To boost production, Mukungu is planning to offer the women three months of training, allowing them to start their own micro rabbit farms. They would be expected to sell their animals back to the Women’s Rabbit Association. This will not only allow Mukungu to increase her own profits, but also further empower the women. Future plans could also include setting up an abattoir.

Next year Mukungu expects to start her tertiary education. “I really have a passion for agriculture, and would love to study agricultural engineering. I have already applied and hope to get into the EARTH University in Costa Rica – one of the best agricultural universities in world. My plan is to study there and come back to Africa,” says Mukungu.