Africa’s middle class has been growing steadily alongside its economies. Yet income inequality is still high across the continent; with a booming elite luxury demand polarised by a vast bottom-of-the-pyramid market, as highlighted by An Hodgson, an analyst at Euromonitor International. Nevertheless, Africa’s various consumer groups offer very real opportunities for companies looking to tap into this potential. 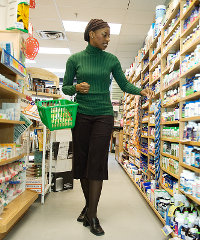 Euromonitor estimates that there are over 313 million middle class consumers in Africa, and that this group is growing rapidly.

“Consumer-focused businesses investigating the African middle class consumer market can expect untapped opportunities in a relatively empty marketplace, but also hurdles to overcome,” said Hodgson. “It is vital that they correctly identify and understand the challenges ahead in order to successfully seize the opportunities presented by over 313 million middle class consumers in Africa.”

A market for global luxury brands

According to Hodgson, Africa’s rich elite offers substantial opportunities for international luxury brands such as in fine wines, designer fashion, sports cars and jewellery, especially in major economies such as Nigeria, Kenya and South Africa.

One of the problems that international brands may face is finding suitable retail space. In most cases, shopping malls and supermarkets only exist in large urban areas in Africa. “This seriously hampers efforts of international consumer goods companies to communicate and distribute to a wide audience,” explained Hodgson. “However, construction companies and property developers should not overlook the vast opportunities presented by this infrastructure shortage.”

While the African middle class is growing in general, their purchasing power still remains relatively low compared to other places in the world, according to Euromonitor’s research. The African Development Bank (AfDB) defines the African middle class as those spending between US$2 and $20 a day in purchasing power parity (PPP) terms. Nevertheless this consumer group is relatively underserviced, providing international companies with opportunities to cater for their evolving and growing needs.

Consumer goods: “Consumer goods companies, formerly aiming exclusively at the rich, can start changing some product offerings to cater for the continent’s expanding middle class,” stated Hodgson. “Although they will also need to adapt their products to meet the taste, needs and budgets of the local middle class, the fact that the African middle class has been so far overlooked and underserved means a relatively empty marketplace with a very receptive audience.”

Education: Africa’s middle class has been described as being aspirational and placing a high value on education. According to Euromonitor, this means that the private education sector offers good growth prospects and can fill the gap left by state schooling.

Africa has a youthful population of over a billion people. This population is expected to double by 2050, and is urbanising rapidly with an expanding working age population.

“Although income inequality, poverty, lack of infrastructure as well as corruption and food security remain significant challenges, Euromonitor International forecasts continued expansion of the middle class on the back of strong economic growth in Africa’s major economies in the period through to 2020,” concluded Hodgson. “For example, in Nigeria, the number of households with an annual disposable income over $10,000 (PPP) will rise by 140% over the 2013-2020 period to reach 13.6 million households.”