Imagine vast and beautiful savannah grasslands as two million wildebeest migrate from the Serengeti National Park in the Mara region of Tanzania to the Maasai Mara National Reserve in Kenya. This trip is 3,000km in length, and represents, in many ways, the very best of what Africa has to offer the international community. But is this all Kenya puts on the plate? The answer is a definitive “no”. Kenya is moving from a frontier market to an emerging market, and is beginning to attract investment from all over the world. 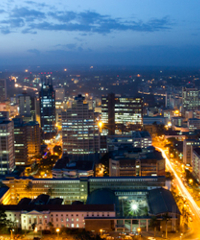 The future of Kenya’s business environment is looking increasingly bright as the national economy continues to grow at an enviable pace.

The future of Kenya’s business environment is looking increasingly bright as the national economy continues to grow at an enviable pace. Although Kenya has had its fair share of political unrest since independence from Britain in 1963, including the Daniel arap Moi era, Nairobi has steadily cemented its place as a hub of commercial activity ahead of any competitor in East and Central Africa. Indeed, it is a veritable gateway to the entire region.

Moreover, Kenya is now considered to be the ninth largest economy on the continent, and with a growth of between 5% and 6% predicted for 2015, its place among the African emerging markets will soon be indubitable. Major contributors to the gross domestic product include agricultural produce, horticulture, and the services industry. The Kenyan highlands are one of the most agriculturally productive regions in Africa, and agriculture alone accounts for about 75% of all employment in the country. This level of employment is very high compared to food secure nations, but tea is a major export and funds about 20% of the GDP. Cut flowers are exported to Europe and form another major export item. Lastly, from the produce side of things, is coffee exports.

The service industry is vital and very active, and contributes a massive 60% to the total GDP. With a list of national parks that include the Maasai Mara, East Tsavo, West Tsavo, Lake Nakuru, and the Aberdares National Park, it is easy to see why tourism plays a central role in the national economy. Tourism is also boosted by the fact that Kenya is a melting pot of differing cultures, and has an extraordinary history of human settlement dating back to pre-historic times. Today, the country is home to people of Bantu, Nilotic, Indian and European descent, and each culture contributes to the nation’s contemporary character.

Kenya is also part of the East African Community, along with Tanzania, Uganda, Burundi and Rwanda. The community is aimed at developing the economy of the entire region, and encourages trade and economic exchange amongst its members. The world’s youngest state, South Sudan, is also set to become part of the community in the near future. Some observers believe that the economic community may one day become a federal state with a single currency.

On an enormously positive note, Kenya is innovating some of the most affordable and popular mobile phone payment systems in the world. M-Pesa, the brainchild of Safaricom, is utilised by over 17 million Kenyan adults, about 75% of the adult population. M-Pesa can be used from anything from sending money back home to paying for taxi fares. Impressive? Moreover, The Economist has called M-Pesa the “most successful scheme of its type on earth”.

In terms of further technological development is the incredible high-speed Internet that Kenya enjoys. Due to the EASSy undersea cable that services East Africa, access to the Internet in Kenya has greatly improved over the past few years. Faster net speed leaves the door open for a plethora of e-commerce companies to open their doors for business. The opportunities are endless.

On a sadder note, and despite all the positive signs so prevalent in the region, there is one weakness that undermines Kenya’s success: high levels of poverty. Poverty currently plagues the African continent, and Kenya hasn’t been able to eradicate it within its national boundaries, as yet. Portends for financial well-being are, despite the above fact, very evident in every aspect of financial life, and continue to become more visible as the country moves from strength to strength.

The good, however, overwhelms the bad, and it is without doubt that Kenya’s reputation concerning the breathtaking beauty of its plains, animal life and flora landscape is soon to be eclipsed by its reputation as a vibrant, growing and innovative economy. In a world where natural resources are often sacrificed to economic prosperity, Kenya stands out as a country that is balancing the relationship between the two. To sum up in short, it would seem that the world is watching the rise of this East African soon-to-be powerhouse, and that its offerings are definitely something to behold.

David Sand is the founder and CEO of Uwin Iwin, an incentive, loyalty and employee engagement specialist company with offices in South Africa, Kenya, Nigeria, India, and Brazil.