The recent 2014 global Doing Business report revealed that Rwanda had shot up 22 spaces in the rankings since last year, now in 32nd place in the world in terms of overall ease of doing business. As a result, the East African country overtook South Africa as the second easiest business environment in Africa (after Mauritius). 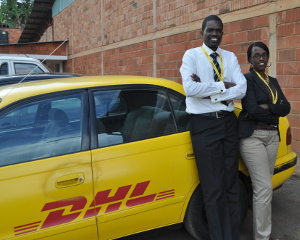 DHL team members Zachariah Mbanda and Eliane Tebuka showed How we made it in Africa around Kigali.

Rwanda is a beautiful and unique country, and during my brief stay in Kigali I spoke to a number of local and foreign businesspeople. Through various conversations, I learnt about the compulsory cleaning day where the public takes time off work once a month to clean their streets. I learnt about how it was safe to walk alone at night, and how corruption is almost non-existent in the country. And despite frequent (yet brief) power cuts, every expat I spoke to shared how impressed they were with the country.

To learn a bit more about the business environment in Kigali, I spent a day with Zachariah Mbanda, sales executive for DHL Express Rwanda, joining him to meet a number of DHL clients. A couple of brief chats revealed some interesting insight into the Rwandan market and economy.

Compared to many other African countries, Rwanda is not known for its extractive industries. However, according to Jean Bosco Mutijima, logistics manager of a dominant trader of Rwanda’s minerals, Minerals Supply Africa, the country’s mineral exports make up a large part of Rwanda’s export revenue.

He added that Minerals Supply Africa exports minerals such as tin ore, coltan and wolfram to mostly the Asian market.

Rwanda’s Skol Brewery started production in 2010, according to the company’s purchase manager, Richard Manzi. The licence to market and manufacture Skol beer in Rwanda (and Africa) was taken over by Belgium-based brewery Unibra last year after Brasserie des Mille Collines sold its stake in the African division. Unibra has since expressed plans to expand the brewery in Rwanda and increase capacity.

The Rwandan beer market is largely dominated by Bralirwa, a subsidiary of Heineken Company. According to Manzi, there is not just a growing demand for beer in Rwanda, but also competition in the market.

The Skol Brewery has three brands: Skol, Gatanu 5 and its most recent release, Virunga Mist. Manzi said the brewery exports to Burundi, Uganda and Kenya and has plans to start exporting to Tanzania. He added that the cost of transporting produce in and out of Rwanda is a major limitation. “Maybe if we have a railway it will be helpful.”

Car sales in Rwanda are dominated by the second-hand market. However, Hyundai recently opened a new dealership and showroom for its new cars in Kigali.

According to Sylvester K Zacharia, finance manager at Hyundai, and Faustin Nishobora, operations manager, the Hyundai cars are brought in directly from South Korea. Since its opening, customers have been mainly government officials and private institutions and Zacharia explained that, due to recent sales, the showroom is a lot emptier than when it first opened in 2012.

Fusion Capital is a business financing and private equity firm with a focus on the East African market. The firm expanded to Rwanda three years ago. Operations and compliance manager Aline Benihirwe said the company has a specific focus on the real estate market in Kigali, mainly mixed commercial and retail developments.

She highlighted that business registration in Rwanda is quick and simple, and entrepreneurs are offered assistance in the process by the Rwandan Development Board (RDB).

Benihirwe added that she has seen the country’s business environment improve in recent years, as well as an increase in foreign investors in Rwanda.

“Business in Rwanda is really growing; people are smarter than before. I [have been] in the business sector from 2007… So I can be a witness from where we have come from to where we are.”

A visit to the five-star Serena Hotel in Kigali revealed a bit about the luxury hospitality industry in Rwanda. Nehemiah Oyoo, the group accountant, said the hotel’s conference centre caters to the increased number of business travellers coming to Kigali. He added that a large percentage of their business travellers are Chinese, highlighting the growing business interest and operations China has in the region, and Africa in general.

Oyoo added that there is a demand for conference facilities in Kigali, especially in the high-end hotel market.

The hotel has also seen a rise in tourism travel, with the mountain gorillas in Rwanda being a major attraction.

Coffee is a major agricultural export in Rwanda and a visit to Rwacof revealed that many coffee producers are focusing on the luxury coffee market.

In early 2011, the coffee price on the international market hit a high, but has since fallen considerably. To reduce the financial insecurity caused by fluctuating prices, many of the industry players in Rwanda have turned their focus to speciality coffee, for which Rwanda has been developing a reputation.