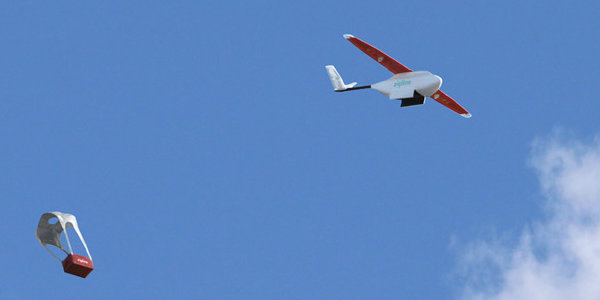 Drones are being used to deliver blood to patients in Rwanda.

In the past, the world was clearly split into developing and developed countries – with the latter boasting the most advanced logistics ecosystems. Today, the emerging markets of Africa are challenging this divide in the fields of transportation and logistics, and in some cases leapfrogging ahead of more mature markets.

From a connectivity perspective these developments are giving rise to a new image of the future for Africa – one which is very different from today. Let’s explore three key highlights from a transportation and supply chain perspective and the implications for Africa in 2030.

Owing to current aviation infrastructure in Africa (or the lack thereof), what should be a three-hour journey between Algeria and Cameroon, in fact takes 24 hours, with the flight touching down in Istanbul and Turkey en route.

A single air transport market for Africa is key to unlocking the opportunities the continent presents. Today, transporting goods in and out of Africa, as well as within the continent, is prohibitive in terms of both time and cost. The restrictions it places on the movement of people also makes for a highly fragmented continent.

A study by the International Air Transport Association (IATA) has forecast that if another 12 African economies opened their skies to each other, fares would become 35% cheaper, enabling 5 million more people to take to the skies, creating 155,000 new jobs and adding US$1.3bn to GDP. The benefits have been clearly witnessed in South Africa, where an agreement to open skies with Kenya saw a 70% increase in the number of passengers, and a similar agreement with Zambia resulted in a reduction of air fares by 40%.

After close to two decades of delays to a pan-African agreement to liberalise the skies, today that goal is within reach. The Yamoussoukro Declaration is set to remove the trade restrictions on air cargo that are in place today, and enable easier travel between African nations. In just five years, the size of the aviation industry is expected to double.

Africa’s current railway infrastructure is largely a legacy of colonial times, with many tracks no longer in use, and many parts of Africa left unconnected. As with the liberalisation of Africa’s skies, a developed railway network will give rise to greater connectivity, significantly reducing transportation times, which in turn would boost trade and the economy.

Just last month, people celebrated the completion of Africa’s first standard-gauge international railway between Ethiopia’s capital Addis Ababa and the Red Sea port of Djibouti. This electric railway line cuts the journey between the two cities – which takes three days by road – down to 12 hours, reducing costs by a third. The new connection will therefore bring considerable economic benefits to both nations and the near region.

Yet the ambition for this railway line is much greater, as African politicians and businessmen view it as the seeds for a pan-African railway network which would boost inter-African trade. And its realisation appears to be increasingly within reach as governments across the continent are driving the development of rail forward.

Nigeria’s own railway project has seen the nation connect Abuja to Kaduna with a 190 km (118 mile) track, intended to be part of a larger 830km track connecting Lagos to Kano; and Kenya is set to open a 485km line running between the port of Mombasa and Nairobi, with plans underway to extend the line to Uganda.

Donkeys in the sky

In Rwanda, the government is approaching the continent-wide lack of connectivity in a novel way, leapfrogging the issue of a void of traditional transportation methods through the use of drones – or “flying donkeys”, as one Kenyan farmer put it.

Since the end of last year, drones are being used to transport blood supplies to patients in remote areas of the country. Talks are already underway between the developers of the Zipline drone technology and the Bill Gates foundation to explore the possibility of delivering medicines and vaccines in the future. Drones offer revolutionary opportunities in healthcare, with huge socio-economic benefits for the people of Africa, as well as multiple other industries.

With the time and investment needed to improve roads and build rail infrastructure, drones have enabled accessibility to the most remote areas of the country overnight. It does not take a huge leap of imagination to envisage how a service like Amazon Prime could use this technology to deliver consumer goods, from perishable to non-perishable items. While drones do not replace the need for critical infrastructure, they can help overcome a lack of connectivity and boost trade.

This leapfrogging of technologies has been seen before in Africa, where mobile penetration helped overcome a lack of ICT infrastructure. Mobile technology connected people to the internet, driving e-commerce. Adding drones into the equation, means e-commerce could overcome the current challenges it is facing in transportation, enabling further growth in trade.

With Africa today representing seven of the world’s 10 fastest growing emerging markets, such developments could not be timelier. Business spending is expected to grow from $2.6tn in 2015 to $3.5tn by 2025. By 2034, the region is expected to have a larger workforce than either China or India, and by 2025 Africa could nearly double its manufacturing output from $500bn today to $930bn. These are just a few statistics that highlight the current opportunities the continent presents to businesses everywhere – both within and outside of Africa. Today Africa is a global powerhouse in the making.

It will, however, take the integration of countries across Africa for the continent to fully reap the benefits these opportunities present. Following on from the trends we have just explored, Africa 2030 will be considerably more connected, both as a continent and within global trade patterns, than it is today.

The statistics highlighted above also make Africa ripe ground for a case study on the emergence of the Fourth Industrial Revolution. With the manpower and resources to drive Africa as a global manufacturing hub, it will be interesting to see how the latest technological developments, from AI to robotics, Internet of Things and 3-D printing, are rolled out in line with the growth of industry.

Technology is providing Africa with the opportunity to leapfrog its lack of traditional infrastructure, as was the case with access to mobile connectivity in place of broadband, and as is the case of drone delivery in place of quality roads or railway in Rwanda. In some instances it may be the very lack of such infrastructure that propels the Fourth Industrial Revolution forward, in place of other solutions.

The questions remain whether Africa has the will to disrupt or be disrupted. Current indicators suggest it is ready to disrupt.

Hassan Houry is the CEO for National Aviation Services. This article was originally published by the World Economic Forum.