How we made it in Africa publisher Jaco Maritz’s travel diary about his trip to Ethiopia for the 2012 World Economic Forum on Africa.

I had a relatively smooth arrival in Ethiopia’s capital Addis Ababa tonight. The hotel forgot to pick me up, but luckily they have their own desk at the airport and a driver was quickly arranged.

The hotel representative manning the airport desk helped me to buy an Ethio Telecom SIM card and some pre-paid airtime. I thought that US$20 for only a SIM card is quite expensive (in South Africa and many other countries on the continent they cost next to nothing), but was told that otherwise I would have to go through an entire registration process. In that case I’m happy to pay the inflated price. 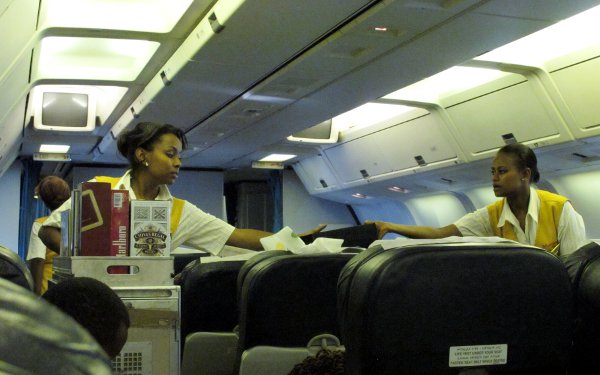 On board Ethiopian Airlines from Johannesburg to Addis Ababa.

While I was waiting for the driver, the hotel representative pointed towards a smartly-dressed young boy aimlessly walking around the airport. He told me that about a year ago the boy was adopted by an American man who took him back to the US. After visiting Ethiopia again, the man fell in love with an Ethiopian woman. The pair decided to rather have their own child and return to the US. When the left, they merely abandoned the adopted boy in their hotel room. Not knowing what to do, the hotel sent him to the airport. The boy was now waiting for his relatives from the countryside to come and fetch him – apparently a three-day trek. Truly a shocking story of people treating African children like commodities.

I woke up to what sounded like religious music and preaching coming from across all corners of Addis Ababa. Breakfast was an average omelette with an exceptional freshly squeezed pineapple juice.

What started out as a beautiful quickly turned into rain, spoiling my plans for a city stroll. Most of the day was spent working in the hotel room. After much frustration with the wireless internet, the hotel eventually hooked me up with a fixed line, which made work a bit easier. 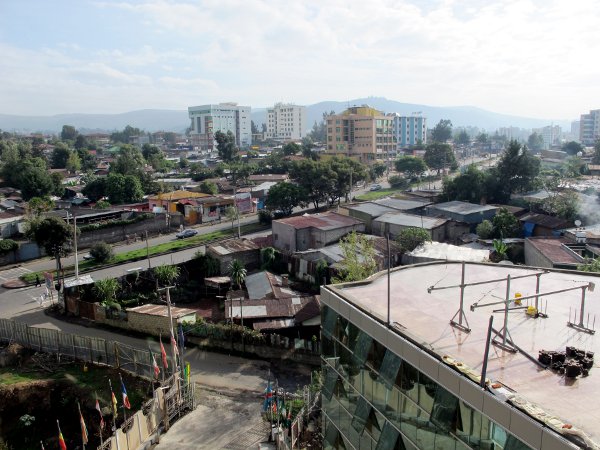 An early morning view of Addis Ababa from my hotel room balcony.

During lunch at the hotel’s Indian restaurant I read a copy of a local business newspaper called Capital. The front page featured an article about a Chinese company that is planning to build a hotel that is set to be Ethiopia’s tallest building. From only one day in the country, I can certainly detect a strong Chinese presence. The Ethiopian Airlines in-flight magazine featured numerous advertisements from Chinese firms, promoting everything from motorbikes to generators. An east Asian company is also involved in the construction of a new building next to my hotel.

After spending the whole afternoon working, I needed to get out. On TripAdvisor’s recommendation I decided to go to the Yod Abyssinia cultural restaurant, situated close to the airport. The restaurant was packed with locals and foreigners enjoying traditional Ethiopian food and entertainment. The buffet had a wide variety and was very good. I also managed to sample the local Meta Premium beer. Diageo, owner of brands such as Johnnie Walker, Smirnoff and Guinness, recently bought Ethiopia’s Meta Brewery for US$225 million.

According to TripAdvisor, Yod Abyssinia is good for “business” and “entertaining clients”. There certainly were many business people in the crowd tonight – especially Asians dining with local Ethiopians. I also overheard an Indian businessman mentioning that he was there to celebrate a recently signed deal. 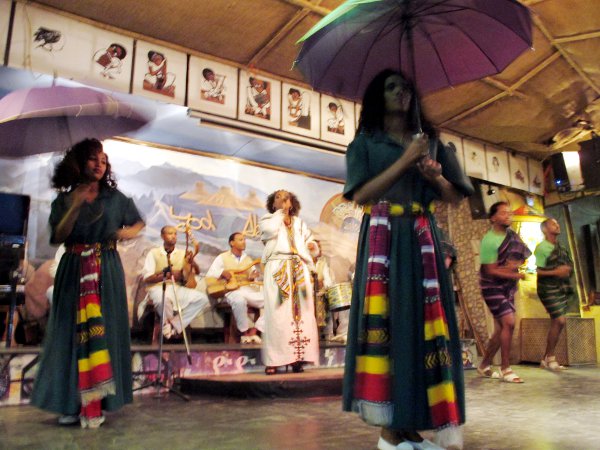 Entertainment at the Yod Abyssinia restaurant.

Tomorrow my week in Ethiopia will start in all earnest. In the morning I will attend the World Economic Forum on Africa pre-meeting press conference at the Sheraton hotel. Hopefully the weather will be good so that I can walk the streets and gain a better understanding of the city and Ethiopia’s business environment.