Entries are now open for the Anzisha Prize, Africa’s premier award for the continent’s best young entrepreneurs. This year, youth organisation partners and media brands all over the continent will join forces to find, celebrate and support the most innovative social and business entrepreneurs under the age of 22. Over US$75,000 in cash prizes will be shared by the 2014 finalists. 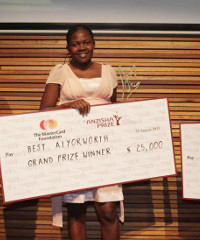 Hosted by the African Leadership Academy (ALA) in partnership with The MasterCard Foundation, the Anzisha Prize celebrates initiative and innovation. It identifies exceptional young entrepreneurs who are blazing a trail of startup success and providing shining examples for others to follow. In just three years, the Anzisha Prize has grown into one of the most sought after awards for young entrepreneurs globally. On top of the significant cash prizes, the 12 Anzisha finalists will join a growing Anzisha Fellow network of the continent’s top youth entrepreneurs.

“This year, we’re determined to reach far and wide through our youth development partners, schools and the media to find the very best of Africa’s youngest entrepreneurial talent,” says Chi Achebe, Anzisha Prize programme manager. “We can’t wait to see what this year’s application process will uncover, and we encourage everyone to help us by nominating amazing young people in their own communities who have started a project or business with potential.”

In addition to the cash prizes, the finalists are also flown to South Africa for a powerful one week entrepreneurship programme taught by the ALA’s renowned Entrepreneurial Leadership faculty, culminating in an awards ceremony that crowns the grand prize winners.

“The Anzisha Fellows are a group of exceptional young entrepreneurs who are creating jobs, improving lives, and forming a truly pan-African network of business innovators,” says Reeta Roy, president and CEO of The MasterCard Foundation. “This prize provides them with an opportunity to learn from each other, and develop skills to grow their businesses and make a greater impact in their communities.”

The Anzisha Prize seeks to find youth between the ages of 15 and 22 who have started and actively run a social venture or for-profit business with potential. The judging panel are looking for ventures that demonstrate ingenuity, scale and positive impact.

This year, the Anzisha Prize has partnered with an exceptional group of youth NGOs in each country to extend its reach. Anzisha country partners for 2014 include The Knowledge Institute (Swaziland), The District (Egypt), iEARN (Côte d’Ivoire, Liberia and Mali), AIESEC (various countries) and Junior Achievement (various countries), among many others. These partners will allow Anzisha to reach more young entrepreneurs than ever before and find another incredible set of Fellows in 2014.

Aspiring fellows can apply directly online at anzishaprize.org or at the offices of any one of our 2014 country partners. Application forms are available in English, French or Arabic, and will be accepted through April 15 2014.

The Anzisha Prize team will also be visiting key regional hubs in the coming weeks to encourage applications as part of the annual Anzisha Prize Tour. The 2014 prize tour cities are Lagos (Nigeria), Cairo (Egypt), and Nairobi (Kenya). These venues will also serve as the locations for regional gatherings for all past Anzisha Fellows in each region. The Anzisha Prize will be speaking as part of Social Media Week Lagos on Thursday February 20 at 9am at Sheraton Four Points Hotel.