For the many African entrepreneurs competing with each other for the attention of the limited available investors on the continent, standing out from others is essential. 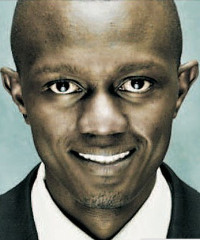 According to Tonee Ndungu, a serial entrepreneur from Kenya, an entrepreneur might have a great business idea, but if they want their idea to stand out from all the other great ideas in a room, they need to ensure they are remembered.

Speaking at the Growing SMEs event held in Kigali, Rwanda last week, which saw entrepreneurs in the region present their businesses to investors and seek advice from experts, Ndungu spoke about the power of a blue suit. “If you look like everyone else, you will not be remembered,” he said.

Ndungu said he wears a blue suit when he goes to a networking event, adding that whenever his partner attends these events, she dyes her hair red. “She stands out.”

Ndungu has had his share of successes and failures in entrepreneurship. When he was 25 years old, he raised US$40,000 to talk to teenagers at Kenyan schools about leadership. A few years later, he built a company with friends that failed. He then built an ICT incubator and raised €5m for five years for it and, on selling it, had just signed a $1m incubation partnership agreement with the World Bank.

Today he is working on his latest company, Kytabu, a textbook subscription application on a low cost tablet that allows primary and high school students to rent all the textbooks in the Kenyan education curriculum on an hourly, daily, weekly, monthly or annual basis.

Victor Schmedding, founder and CEO of Cloudwork and ambassador to Dutch-based NGO BiD Network, supported Ndungu’s advice and suggested that there is an opportunity for an entrepreneur to start a fashion company in Africa that sells business suits in colours other than black. “What I see here in East Africa is that everyone here is wearing a black suit,” he noted.

“Everyone has white business cards,” said Ndungu. “Try stand out.”

Personal branding is important for an entrepreneur

“The investor is looking at the entrepreneur and his team first,” said Schmedding, adding that he believes personal branding can really work for an entrepreneur. “It really puts you above the crowd.”

Schmedding highlighted Ndungu’s personal website as a good example of successful personal branding. According to Ndungu, the website took him two hours a day over two weeks to successfully complete, and requires little updating. It was also completely free. He advises other entrepreneurs to invest enough time in making sure they brand themselves as an entrepreneur, and ensure information about them is easily available on the web.

According to Barbara Birungi, executive director of Hive Colab and founder of Women in Technology Uganda, entrepreneurs should also ensure they market themselves and their company using free platforms like online social media.

“With most technology startups, they don’t have money to go market themselves or create ad campaigns and all that,” she pointed out. “But there is social media – Facebook, Twitter, Google Plus and all those other networks.”

Birungi added that, using these platforms, entrepreneurs should talk about what their businesses are doing and show interest in the social accounts of the people they meet at networking events. That is how you get remembered, she concluded.