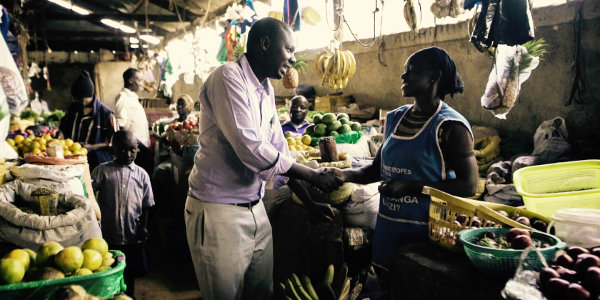 Mastercard has launched a new digital marketplace for east African farmers to sell their crops and receive payment via their mobile telephones.

The World Bank’s Consultative Group to Assist the Poor (CGAP) estimates there are roughly 500 million farming households across the world that fall under the category of “smallholder” – made up of no more than a few hectares of land, and run primarily by family members.

In east Africa, smallholder farmers trying to get the best price for their crops are often dependent on middlemen –  agents, buyers and sellers who leave them with inconsistent and unpredictable returns. That problem is exacerbated by the farmers’ lack of access to financial tools, such as bank accounts.

“What’s historically been used has been these middlemen arriving at the farm gate, or setting up marketplaces in local communities, where they’re doing deals there and coming back later, and paying those farmers in cash after they’ve been able to sell the goods… And that can be a gap of as much as two weeks,” said John Sheldon, a senior vice president at the company in charge of innovation.

2Kuze capitalises on the widespread use of mobile phones across Africa to conduct peer-to-peer monetary transactions, Mastercard says, and the programme is intended to increase farmers’ earnings by giving them access to a wider network of buyers and faster transactions.

“With technology comes great scale, and so if we can help [buyers] work with 10 times the number of farmers they’ve historically been able to work with… they have the opportunity to make more money, even if the margins on any given transaction is lower.”

Reaching those outside the system

For 2Kuze, Mastercard is partnering with non-profit Cafedirect Producers Foundation, which says it works with 300,000 smallholder farms around the world to promote fair-trade practices. Farmers in Kenya, Tanzania and Uganda participated in the development of 2Kuze, and the pilot programme is launching with 2,000 smallholder farmers in Kenya’s Nandi Hills region, famous for its tea farms.

It’s not yet clear how Mastercard will profit from its efforts. Sheldon said the company is still experimenting and “testing multiple potential revenue models, whether it’s percentage of sale or licensing access to very, very large-scale buyers”.

One indirect benefit for smallholder farmers is the creation of a financial log or history, which could prove helpful when they seek credit or loans to expand their farms.

“Each bank has their own credit model that they’re utilising, and [with] our ability to provide them with the visibility into these transactions, they can… do some of those key credit assessments,” Sheldon said. East African farmers’ financial performance is not measured by a scoring system like the FICO analyses used in the United States and many other countries.

Mastercard is not the first company to offer financial services to smallholder farmers in developing countries. Matthew Saal, head of digital financial services at the International Finance Corporation, said Mastercard’s system has “been both developed and deployed in east Africa, providing tailor-made solutions to meet the great local need for expanded financial access in rural areas”.

IFC is a member of the World Bank group that finances and provides advice for private-sector ventures in developing countries.

“IFC is working with partners like Mastercard, and others around the world, toward the shared goal of achieving Universal Financial Access by 2020, and believes that digital platforms have a critical role to play in reaching the 2 billion adults globally that aren’t part of the formal financial system,” Saal said. – VOA