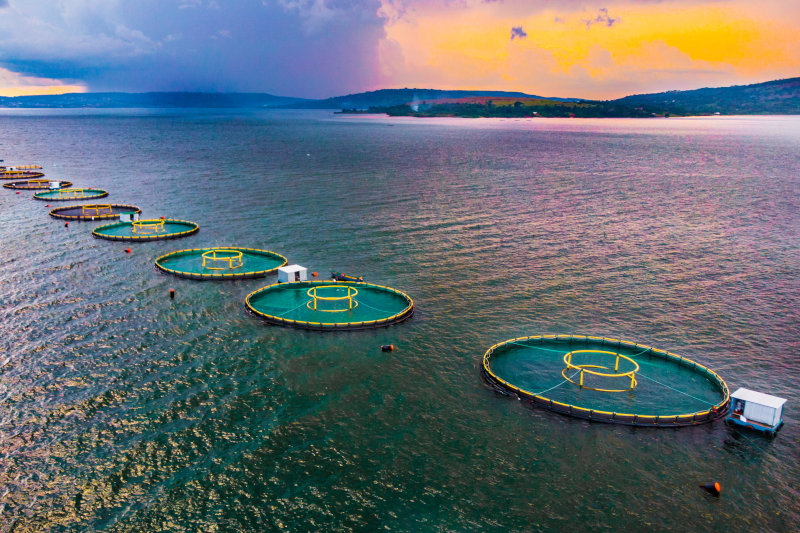 FirstWave Group is a vertically integrated fish farming business with production operations in Zambia and Uganda. Its products are sold throughout East and Southern Africa. Betsy Henderson spoke to FirstWave co-CEO Tembwe Mutungu about the group’s business model and the industry’s growth potential.

What led you to first identify the potential in this industry?

We started very much as a production business, and that is the core strength for our company; we see ourselves first and foremost as a leader in fish production. But the business has evolved and grown, in part due to recognition of opportunities across the entire value chain.

We are one of the few fully vertically integrated players in this space on the continent; when people talk about vertical integration in this industry, they often talk about fish production and all of the downstream activity, such as distribution and retail. However, we are engaged in the production of fish feed all the way through to retailing fresh fish delivered daily to urban centres throughout East and Southern Africa. Our operating companies include Yalelo Zambia, Yalelo Uganda and Aller Aqua Zambia, and we also have sales into Malawi, South Africa, Democratic Republic of Congo, Kenya and Tanzania.

So as a company, over the past four to five years we’ve moved from a place of being focused on building a business to forming a group, to now laying the foundation for a successful aquaculture industry that spans from fish feed right through to retail. Even though we started with production, we found ourselves going upstream back into fish feed. Today – and this is true for any livestock business – we are essentially in the business of taking grains (soya, maize, and wheat bran), and turning that into fish for urban consumers.

Your company heralds fish as the most affordable protein in Africa. What do you mean by this?

Our argument is that fish at scale beats out all other animal proteins, so I’ll answer the question from a couple of different perspectives.

From a direct cost perspective, all livestock production is about converting plants into animal protein. Biologically, fish use less kilogrammes of feed for every kilogramme of protein they make. This means that they can do half as better as chicken, three times better than pigs, and eight to 10 times better than cattle. Fish are more efficient at serving as a source of protein. In fact, in some circumstances, the energy consumption associated with fish can even be on par with soya.

From a human cost perspective, the usable protein per kilogramme is higher in fish than other sources of protein. Humans can only assimilate a certain amount of protein from every kilogramme of meat (any type of meat) at one time, and fish has one of the highest levels of usable protein, so it is literally more affordable for our bodies. 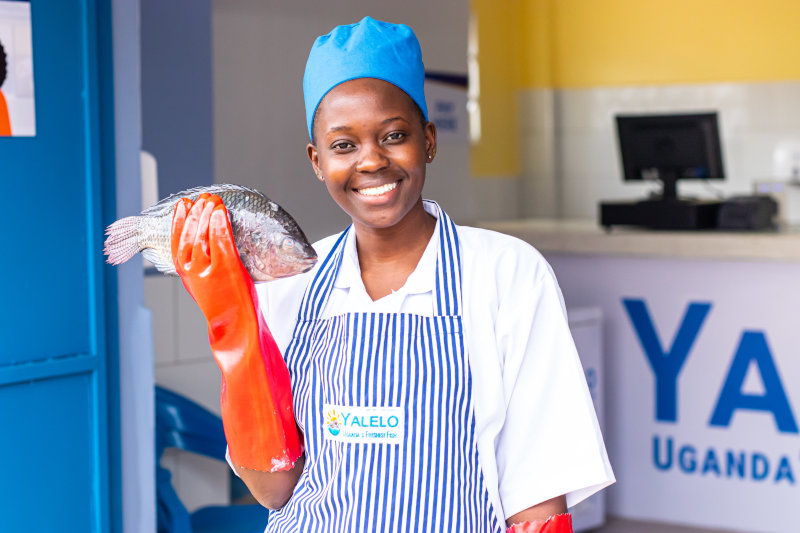 FirstWave Group operates its own retail stores under the Yalelo brand.

From an environmental perspective, in addition to using less feed, fish also use less land and water, and are responsible for fewer emissions than other sources of animal protein. Some statistics suggest that fish produced at scale can nourish people almost 40 times more efficiently for every hectare of land used compared to beef.

For these reasons, we think fish is the best solution for urban protein food security on the African continent. It’s not necessarily the solution for all protein food security, because you do encounter cold chain distribution problems wherever there’s disaggregated demand, such as in rural areas. With 50% of the African population estimated to live in urban centres, we believe that fish is an optimal – and the most affordable – protein source for urban consumers from a direct cost, health, and environmental perspective.

What opportunities do you see in the production and retail of fish in Africa?

We see the aquaculture industry opportunity as one that is so large that, quite frankly, we cannot build a fish farm big enough to be able to serve the needs of Southern Africa.

In terms of fish production, I think the African continent has all of the production factors required for a successful aquaculture industry. After all, there are something like 2,000 freshwater bodies across the continent, yet aquaculture has just not kept pace with the decline in wild catch from lakes and rivers here in Africa. Globally there is now more farmed fish than fish that is caught in the wild, whereas in Africa, farmed fish is just a small fraction of total fish supply. In fact, the top commercial producers in Africa only make up 0.4% of the continent’s total supply; yet fish is Africa’s favourite source of protein, with 35% of animal protein consumption on the African continent from fish. 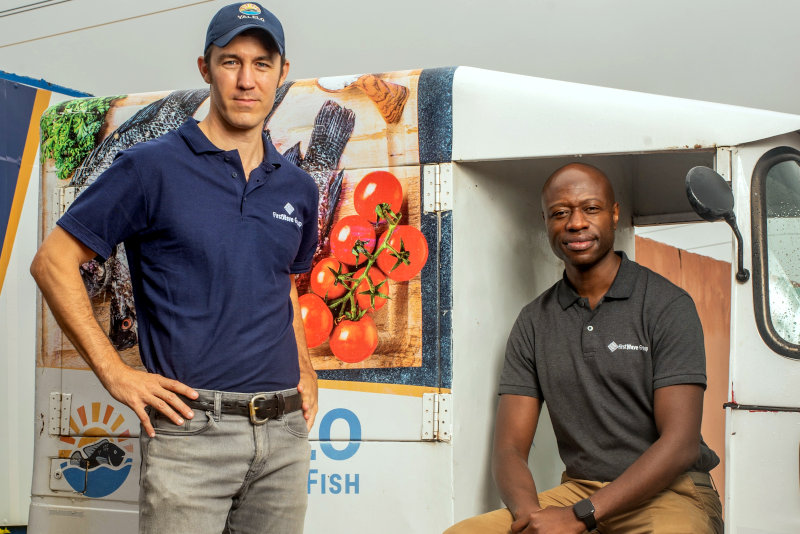 Despite this demand for fish, a significant percentage of fish consumed in Africa is still imported. To us, this represents a supply deficit that continues to grow year-on-year across the continent for two reasons: one, due to supply constraints from local rivers and lakes (wild catch simply cannot keep pace). Two, because of population growth and increasing urbanisation across Africa, alongside an increasing consumer preference for locally-produced fish.

In Zambia, I love to say that we produce a truly local fish – and it’s true because we both produce a local type of fish (tilapia) and also use feed that is locally produced. For example, this year we’ll end up consuming something like 5% of Zambia’s total soya bean output. With the push to meet our growth targets, this may grow to 7% or 8%. Either way, we see this as a market-creating opportunity and believe that if you establish an anchor business, you will see more opportunities up and down the entire value chain.

FirstWave Group also has a fish feed production business in Zambia. What is your outlook for this industry?

Currently, you see a lot of European and Latin American producers sending their feed to different parts of Africa, but those feeds are not developed specifically for fish production in African environments. That’s one issue; another is that you end up with pretty expensive feeds that are not particularly accessible to small-scale farmers, who are seeking out better feeds in order to be more productive and efficient. 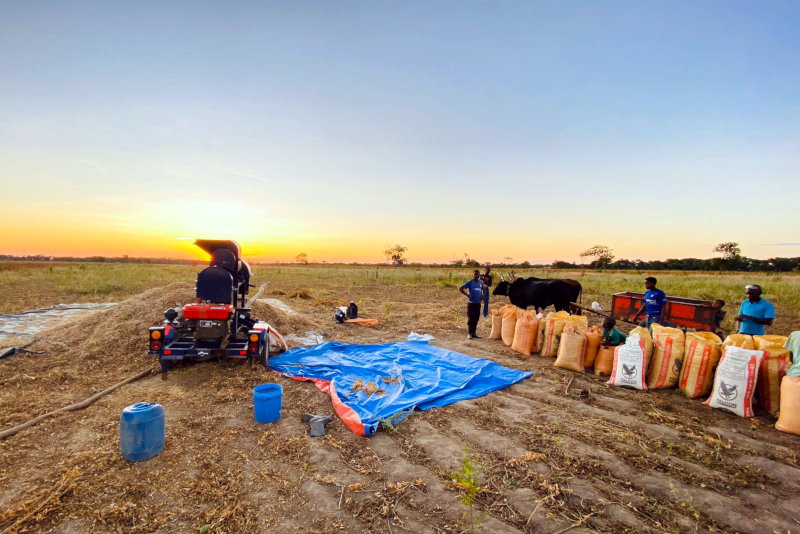 Today we see demand from a number of commercial-scale players (those who produce over 2,000 tonnes of fish a year), which is still relatively small on the continent though growing slowly.

But for me, the real fish feed opportunity is concentrated in emergent (those who are producing between 100-2,000 tonnes of fish a year) and small-scale farmers (those who produce less than 100 tonnes a year). It’s not easy for smaller farmers to participate in fish farming – based on the amount of knowledge and working capital required – but we do sometimes get surprised by the demand that we get for feed from these smaller-scale farmers.

Overall, we anticipate faster growth in the emergent farmer segment, where you see lots of people coming in and out, so it’s a safe place for us to play. In the long-term, some of these newer fish farmers may engage in strategic partnerships with other feed providers or produce their own feed.

How would you describe competition in this industry?

From an industry perspective, a certain amount of competition is healthy and necessary for the industry to grow. On the aquaculture side, I think there’s less competition, although it depends on how you’re thinking about competition. From an industrial to commercial scale aquaculture perspective, we’ve seen increased competition over the last 12 to 18 months as a result of lower household incomes and food price inflation due to COVID-19; consumers have less money to spend and so are more selective about the amount of animal protein they purchase in general. I think this is a short-term trend and any company who is able to navigate the next year or so will be in a good space on the other side.

On the fish feed side, we’re seeing more and more players seizing the opportunity. In East Africa, for example, you have maybe seven or eight options for sources of feed. There are two Kenyan producers, two Zambian producers (including ourselves), and imported feeds from Europe and Brazil, so there’s a healthy amount of competition. The next thing we’re waiting to see is if anyone will take the risk of putting a feed mill down or if any third-party feed sellers will launch operations without an anchor fish production company. 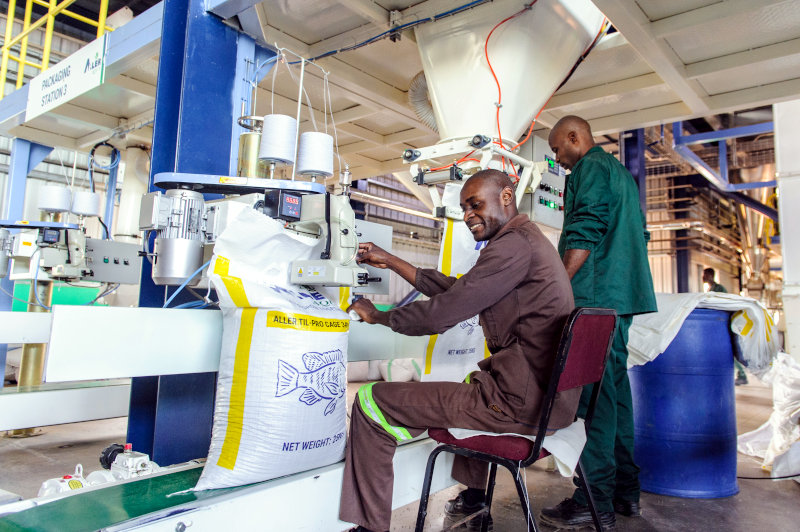 For fish production, why tilapia? Do you anticipate adding any additional types of fish in the future?

We started our business in Zambia, and when people talk about “fish”, they literally mean tilapia (or bream, as it’s called there). In Uganda, it’s a little different, as you’ve got tilapia as well as Nile perch. If we ever entered Nigeria or Angola, there would be a preference for catfish, as opposed to tilapia.

For us, it’s about starting with our consumers, thinking about the specific geography and saying, “What is it that people are looking for?” That is our starting point. We will continue with a tilapia focus, and that is probably what will define our growth, at least over the near term. But we fully recognise that as we start to grow and expand across geographies, that is likely to change, because you have to be consumer-first in your approach.

FirstWave Group has operations in Uganda and Zambia. Describe the business environment in these countries.

One of the reasons that we selected Uganda was because of the close cultural proximity to Zambia, where our fish production first began. When you’re going into new markets, you want to minimize the amount of complexity or risk that you’re having to deal with. Some of the specific operations are going to be different, but it helps to work in places with similarities.

I also take the perspective that the broad challenges across the countries – and actually even across industries – are generally the same in frontier markets. The difference is how you address things at the local level. In this particular industry, as you go into each market, it’s also mostly a blank slate and you have to build up from first principles. We transfer our production knowledge from one geography to another but encourage our country CEOs to use their country-specific knowledge to address nuances that arise in operations.