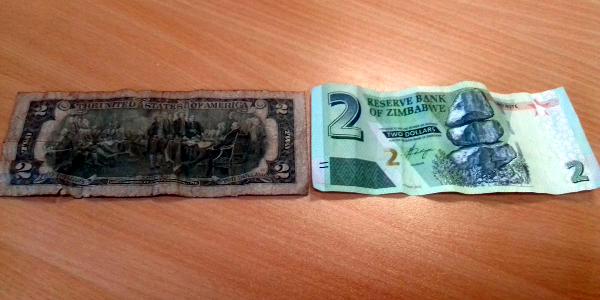 A well-used US$2 note next to the brand new $2 bond note. The bond note is now in circulation in Zimbabwe but economists and business people fear it will not hold its value to the strong US dollar. Photo by @Preciouslanna on Twitter.

It has been over two weeks since the Reserve Bank of Zimbabwe (RBZ) released its controversial bond note into the market at a denomination of $2, and the initial protests and public uproar have died down with consumers heading into the festive season. As economist John Robertson, managing director at Robertson Economics, puts it, “Scarcity seems to have conferred some kind of public endorsement.”

Bond notes are the RBZ’s solution to a severe shortage of US dollars in the country. The US dollar has been the dominant currency (although not the only legal tender) in the market since the country was forced to abandon its own local currency, the Zimbabwe dollar, in 2009, after it experienced one of the worst cases of hyperinflation in recorded history.

But supply of the adopted US dollar is dwindling. This is mainly because the country’s local manufacturing activity has fallen and it now has to import more than it exports. This means more US dollars are leaving the country than coming in.

So the RBZ decided to print its own version of the US dollar in the form of a bond note. The country has already been transacting with ‘bond coins’ of 1c, 5c, 10c, 25c, 50c (pegged to the US dollar) since 2014. The purpose of these was to provide consumers with change when purchasing goods in US dollars, where the US$1 note was the smallest in circulation.

In May, the RBZ announced it would release US$200m-worth of bond notes – backed by a facility from the African Export and Import Bank (Afreximbank) – which would be used to pay a 5% incentive to exporters before circulating in the market. It initially stated that the notes would be released in denominations of $2, $5, $10 and $20, but last month a statement by the bank said it would issue bond notes in denominations of only up to $5.

On the 28 November it introduced US$10m-worth of $2 bond notes, followed by an additional US$7m the following week. It also introduced the $1 bond coin to the market. The $5 bond note is yet to be released.

Initially there was panic, as many believed that the bond note would not hold its corresponding US dollar value. But according to economists and business people in the market, things have returned to business as usual in Zimbabwe.

Ramachandran Ottapathu – CEO of grocer Choppies, which has 30 stores in Zimbabwe – says he is not concerned about the bond note, because it currently forms such a small percentage of total cash supply in the country. The retailer, like many others in the market, has its registers full of US dollars, bond notes and coins, as well as the South African rand (another legal tender heavyweight in Zimbabwe’s multicurrency system).

Divine Ndhlukula, managing director of security service provider Securico, is also comforted by the small amounts of bond notes in the cash supply.

“The banks have very little bond notes now and they are giving 30% of cash needed in bond notes and the balance in US dollar notes,” she told How we made it in Africa.

“What we are encouraging our staff to do is to pay using their debit cards for whatever they wish to pay for, in particular food purchases, etc. It becomes a problem when they need cash for commuting to work and some small retailers don’t want to be paid via electronic means, and when they need to send money to their rural homes.”

Lipstick on a frog

According Ndhlukula, there has already been some devaluation of the bond note in the black market.

“It’s already devalued informally as people who want to travel or pay for things outside of Zimbabwe would pay a premium to get hard currency, which is very scarce now.”

Zimbabwean economist, Dr Gift Mugano, says bond notes make up less than 1% of the total currency in circulation now, and will account for 3% when the full US$200m is released – which he expects will be end of 2017. He came across his first bond note while paying for groceries in Harare a few days after they were released, but says there is such a small percentage in the market that it is likely that most Zimbabweans will not come across one for some time.

He approves of the RBZ’s decision to cap the release of the bond note denomination at $5. “If they had released the $20 bond note it would have created problems of black market activities and depreciation.”

However, he says he is concerned that the printing of the currency does not end there.

“Even for me, as an economist, my worry was not the bond note. It was the intention that the reserve bank might want to print more money and introduce the Zimbabwean dollar by the back door,” he explained.

“If that happens then we are in trouble. For one if you print larger denomination, you are driving a black market currency exchange. Automatically it will depreciate in value because people will change it. Obviously it will lose value. You won’t get a $100 bond note for US$100.

“For now with the small denomination existing, there is no incentive for someone to change the [exchange] rate at $2. It doesn’t make any additional economic gain. It is not real money. It is a token for change, if you want to look at it that way.”

He added that trying to solve Zimbabwe’s US dollar cash crisis with bond notes is like “putting lipstick on a frog”, as dollars will continue to be scarce so long as exports dwindle.

“Our exports contribute about 60% of the total cash in circulation, and the diaspora remittances from the people outside of Zimbabwe is about 20%. So that is about 80% of the cash in circulation. But the exports are going down because we don’t have the capacity to export,” he explained.

“Diaspora remittances are also going down because the diaspora are also feeling the strengthening of the dollar, so they are sending less money in real terms. So, we are in a catch-22 and the queues at the bank are a clear symptom of the real problem: we are not exporting. Then add to this that the fiscal deficits are accumulating to about US$3.5bn.

“So the system is collapsing slowly and one might have the temptation of printing those additional bond notes. So that is my worry.”

Ndhlukula agrees: “Business’s worry is that we don’t know if government will not print bond notes beyond the US$200m, as this would cause inflation. We wait and see, but the governor of RBZ assured us they would not.”