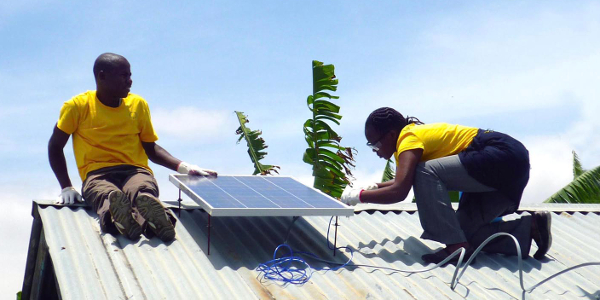 One of the ideas identified was the recycling of off-grid solar energy system batteries.

About a year ago, How we made it in Africa launched the Profit-making idea feature – a series of short posts, each with a piece of information that we think you might find useful: for investment, for growing your company or to start a new business. Here are a selection of our top ideas so far.

Sesame production is currently one of the hottest industries in Nigeria, according to Aubrey Hruby, an investment advisor and founder of the Africa Expert Network. “Everyone is looking at sesame,” she said at the 2016 SuperReturn Africa conference in Cape Town.

It is estimated that Africa accounts for about a third of the global sesame production and contributes about 70% to the global trade, a share that continues to grow. Read the full post.

The past couple of years have seen a number of African countries fall out of favour with investors, particularly commodity exporters – such as Nigeria, Angola and South Africa – which have suffered a slow-down in economic growth. This has subsequently led to a drop in company valuations.

Michael O’Malley, director of real estate development company RMB Westport, says there is an opportunity for value retailers to enter the Nigerian market, which will drive the development of shopping centres.

“The retailer base in Nigeria at the moment is not broad enough for even the smaller centres to gain a lot of traction. The types of retailers that are currently present in Nigeria are not offering a discount product to the public. We need value discount retailers to… look at the market opportunity in Nigeria.” Read the full post.

4. Battery recycling – a spin-off from the small-scale solar boom

Small-scale off-grid solar energy is a booming new industry, especially in East Africa where companies such as M-Kopa, Mobisol and SolarNow have connected over 500,000 households in just a few years. It has been suggested that the industry could be as transformational for Africa as mobile phones.

During a panel discussion on off-grid power at the 2017 Africa CEO Forum – held in Geneva, Switzerland – stakeholders suggested a potential spin-off opportunity from the household solar industry: the recycling of the systems’ batteries. Read the full post.

Dried egg yolk. Sorbitol. Sodium sulphate. These are some consumer goods ingredients that could be manufactured in Africa but are currently imported.

Vikram Agarwal, Unilever’s executive vice president for supply chain in Africa, highlighted dried egg yolk (used to manufacture mayonnaise) and sorbitol (an ingredient in toothpaste) as products which could theoretically be made in Africa. Another item with the potential for import substitution is sodium sulphate, which is used to produce detergents. Read the full post.

6. Keep an eye on Senegal’s emerging oil and gas industry

Participants at the Africa Oil and Power conference highlighted the recent offshore gas discovery in Senegal as a major development.

An oil and gas boom could have a positive economic knock-on effect, generating demand for products and services – including construction, accommodation, retail and banking – that support the hydrocarbons industry. One Senegal-based executive recently told How we made it in Africa that oil and gas activity is already creating excitement among the local business community. Read the full post.

Nigeria’s oil-related economic woes is opening up opportunities for the domestic cultivation and processing of agricultural commodities. The cost of importing food has increased significantly, making local production more appealing. One person taking advantage of the situation is Aliko Dangote, founder of Dangote Group and among the country’s richest people. Read the full post.

Companies in the construction sector should consider exploiting opportunities along Mozambique’s Nacala corridor – a railway and port project linking the coal deposits in the Tete Province (situated in the west of the country) with the north-eastern port city of Nacala.

According to the African Development Bank (AfDB), small- and medium-sized enterprises should take advantage of the business opportunities provided by infrastructure projects associated with the Nacala corridor. The AfDB recently approved a US$1m grant to improve the competitiveness of local construction-related companies. Read the full post.

9. Manufacturing of matches in Rwanda

Can you name one untapped business opportunity in Rwanda that investors can take advantage of?

This was the question How we made it in Africa posed to a panel of business leaders at the Afreximbank annual general meeting, held in the Rwandan capital Kigali.

10. Become a supplier to Chinese companies in Africa

A new report by McKinsey & Company states that there are an estimated 10,000 Chinese-owned businesses in Africa, significantly more than what official figures indicate. Local African companies can either view these Chinese firms as a threat, or an opportunity to forge new business relationships.

One way African companies can benefit from the Chinese presence is by becoming their suppliers. Chinese firms in Africa currently only source 47% of their inputs from local companies. Read the full post.

According to a new report by the Food and Agriculture Organisation, titled The state of food and agriculture, even some of the poorest regions have seen the emergence of a rural consumer class. For instance, it is estimated that 55% of the middle class across Ethiopia, Malawi, Mozambique, South Africa, Uganda and Tanzania live in the countryside. Read the full post.

Opportunities exist for educational institutions in Africa to target students outside of their home countries. A report by the World Bank, titled The Unexplored Potential of Trade in Services in Africa, highlights new commercial opportunities opening up in areas such as franchising and the twinning of academic programmes, which allows students to earn credits for courses from universities besides their own.

“These relatively new forms of trade are beginning to gain in importance in sub-Saharan Africa, and have high potential for further expansion… Trade in education and health services also features high on the agenda of policy makers and regional organisations in sub-Saharan Africa,” notes the report. Read the full post.