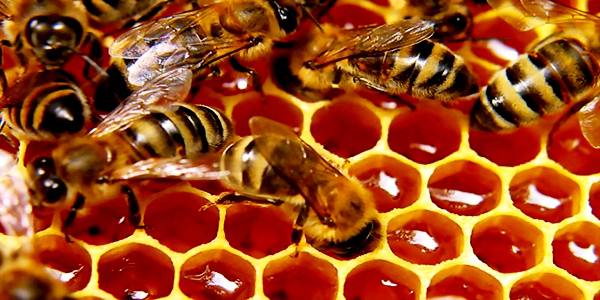 Cameroon’s Ministry of Agriculture estimates there are 20,000 farmers in this country who earn about 30% of their annual income from selling honey, bees and related products.

Like many educated people in Cameroon, Timothee Awanga found that a college degree did not guarantee him a better life. His life changed for the better when he learnt to cultivate an abundant natural resource in his home village – bees.

He became an entrepreneur selling bees and their by-products, honey and beeswax. Now he is using bees to transform the lives of many others near Yaoundé. He is teaching hundreds of young people to set up little honey enterprises of their own.

Timothee Awanga, 42, teaches 15 Cameroonian youths about honey-bee colonies near his home in Matomb, a village 70 km from Yaoundé. He takes them through his 30 bee hives, each of which holds at least 30,000 bees.

He waits until nighttime, when the hive is full of worker bees returned from collecting nectar. Then he locks the hive and brings it to his trainee bee farmers.

After graduating from university 20 years ago Awanga had no job, so he decided to return to his village. There, he began harvesting honey from bee hives. Selling bees, honey and beeswax has helped him provide for his wife and four children, and he also has trained several hundred Cameroonians to be bee farmers.

Andrew Guizele, one of the youths Awanga has taught, now has his own bee farm in Nkolbison, on the capital’s outskirts.

A strategic honey development programme has created seven jobs in Nkolbison since it began five months ago, he says, and the hope is to expand the village industry to other suitable areas.

The nation’s livestock minister, Dr Taiga, says bee farming is being promoted in all of the country’s agricultural training centres – not only to create jobs and generate revenues, but also to conserve environmental resources.

The training teaches young people not only how to become professional bee farmers, he says, but also to grow their enterprises, to create more jobs and economically empower other young Cameroonians.

The Ministry of Agriculture estimates there are 20,000 farmers in this country who earn about 30% of their annual income from selling honey, bees and related products. The government is unable to say how much honey they produce, because it tends to be traded in small quantities in local markets where sales are not recorded.

However, those who are trying to transform bees and honey into money and wealth face plenty of difficult problems – from hive construction, to a lack of storage and processing equipment, to bush fires, pests and a shortage of skilled labour. – VOA