Africa has “enormous potential” for low-cost air travel, according to Tony Fernandes, the man behind successful budget carrier AirAsia. 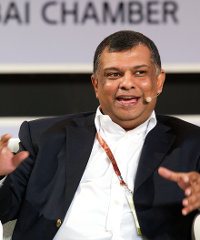 In 2001 he bought the struggling Malaysian-based AirAsia and managed to turn it into a thriving business. It has been described as a pioneer of budget travel in the region. And with interests in numerous other ventures, Fernandes is now considered as one of Asia’s top business people. He also plays Donald Trump in the Asian version of reality show The Apprentice.

During the recent Africa Global Business Forum, held in Dubai, Fernandes suggested he is considering launching flights to Africa.

“Connectivity between Africa and Asia is very poor. That is something I’d love to get into. I remember when I went to see the president of Ghana, I had to go via London to get to Ghana.”

According to Fernandes, Asians are getting more adventurous and Africa is still a relatively unknown tourism destination for most. He hinted at opportunities to launch flights from India or Malaysia to countries such as Kenya, Ethiopia, Morocco, Algeria and Tunisia.

Also, he believes flying within Africa is too expensive. “At AirAsia we charge about US$35 per hour, so a two-hour flight is $70, which in most [African] countries is the price of a taxi fare from the airport. So there is enormous potential when you bring down fares and create markets that just weren’t there.”

There are however a number of no-frills carriers already operating on the continent, notably Kulula and Mango in South Africa, and Jambojet in Kenya.

In addition, low-cost carrier Flydubai links about a dozen African cities to the Gulf region

Fernandes predicts budget air travel would “make the continent a much smaller place” and allow small and medium enterprises to grow regionally.