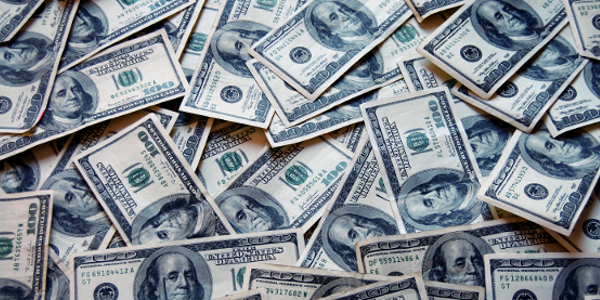 The 2008 economic crisis is the single largest factor that has driven developing countries to seek alternative sources of financing for social and developmental infrastructure. This was a result of the drying up of bilateral loans and grants from European and American countries.

Some African countries put forward the argument that the funds from capital markets, or sovereign bonds, are a cheaper source of alternative financing. A sovereign bond is a debt security issued by a national government known as a Eurobond. It is denominated in a foreign currency, usually the dollar, rather than what its name (euro) implies.

Seychelles holds the distinction of being the first sub-Saharan African country to issue a sovereign bond – it issued a US$30m bond in 2006. This was followed by the Democratic Republic of Congo (DRC) issuing $454m, Gabon $1bn and Ghana $750m in 2007.

Many of these Eurobonds will mature between 2021 and 2025. It will require these sub-Saharan African countries to repay an average of just under $4bn annually in that period. But they are already currently bleeding a rising total of just over $1.5bn in annual coupon payments on these Eurobonds. This represents a total of an additional $15bn across the term of the Eurobonds. The total accumulated bonds are in excess of $24bn. The principle amount of this is $35bn.

The $750m Ghana bond, with a ten-year maturity, was issued in October 2007 and was four times oversubscribed. The principle repayment, which kicks in in 2017, will signal the direction of the continent’s economic dynamics in the years to follow. The writing is already on the wall. Ghana has already buckled, requiring an International Monetary Fund (IMF) financial restructuring package.

At the end of 2015 Ghana agreed to an IMF bailout. It is underpinned by austerity measures that include reviewing and streamlining tax exemptions for free-zone companies and state-owned enterprises. A new tax policy is expected to be enacted for small businesses and a raise in value-added tax is planned.

Ghana’s financial problem was brought on by a sovereign debt crisis, rising interest costs, policy slippages and external shocks that have dampened the country’s medium-term prospects. The country carries a total Eurobond debt of $3.53bn on its external debt of more than $11bn. Its debt position of $23.38bn (both local and external) represents more than 55% of gross domestic product (GDP) and is teetering on the edge of being unmanageable. The convergence criteria under the monetary union protocol standard for Africa states that public debt should not exceed 50% of GDP in net present value.

Ghana, whose growth is driven by the exports of gold, oil and cocoa, now faces the daunting task of managing its fiscal deficit, rising inflation, an energy deficit and reduced government revenue due to the slump in global commodity prices. The challenge, as in most African countries, couldn’t come at a worse time. Ghana is scheduled to hold presidential elections in 2016. Fiscal discipline will be a factor of least priority on the political agenda.

The world before sovereign bonds

Prior to these countries issuing the bonds, they carried foreign debt in the form of bilateral and multilateral concessional loans. These loans carried an average interest rate of 1.6% and a maturity of 28.7 years. The financing from sovereign bonds comes at an average floating coupon rate price of 6.2% with an 11.2-year maturity period. In recent times the coupon rates on these bonds have hit record highs. This is a reflection of deteriorating economic indicators among sub-Saharan African countries.

The Achilles heel for these countries, outside the realm of poverty, governance and political will, is their dependence on one major export product to generate foreign exchange. In at least seven of these countries there is direct dependence on one key product to drive the country’s economy. This is evident with Angola (oil), Zambia (copper), Nigeria (oil), Gabon (oil) and the DRC (copper). 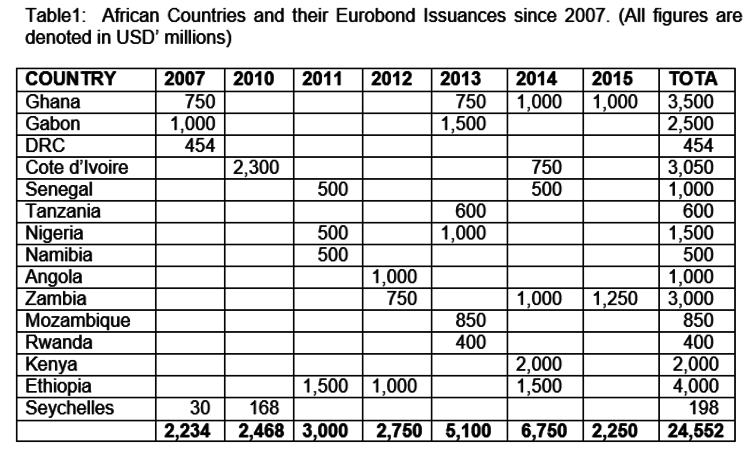 And in the same year Maria Kiwanuka, former finance minister of Uganda and current economic advisor to the president, alluded to the fact that African governments are under pressure to take on debt at market rates despite the risk of public debt rising to unsustainable levels during currency depreciation and increasing bond yields.

Uganda is the only African country that has spoken of the acquisition of Eurobonds as too risky for countries on the continent. Governor of the Bank of Uganda Emmanuel Mutebile said:

“We should not be complacent about the dangers of big projects built on sovereign debt because it would be unwise for African countries, which will never again get debt relief. From what we are seeing in Ghana, we are not yet ready to issue sovereign bonds.”

The cost of finance for the Eurobonds is the first key risk factor. Internal analysis of the exchange rate risk must be considered, unless the country truly believes that it has the capacity to raise the resources for repayment of the debt from commodity export revenue.

But future indicators are all very ominous, showing a slowdown in demand for commodities from China, a possible increase in bond yield rates by the US, lowering oil prices and downgrading of global growth indicators. All these factors will put pressure on countries that have issued sovereign bonds.

The second key risk in the procurement of sovereign bonds lies in debt sustainability. This is the risk associated with poor management of the proceeds of the Eurobond. They end up being invested in non-income-generating social infrastructure to the extent that the government is unable to raise the necessary funds to repay the loan. Other than capital infrastructure developments at least three of the countries – Rwanda, Gabon and Ghana – have used part of their Eurobond proceeds to re-finance public debt.

Sub-Saharan African countries seem to carry a vicious circle of problems revolving around underdeveloped economies. They oscillate around single-commodity exports, recurring power deficit issues, lack of fiscal discipline with budget deficits well above the convergence criteria for Africa of 3% of GDP, and unending rising debt positions even in times of good economic growth.

The cyclical events of unsustainable debt of the 1980s, when the continent’s debt position stood at more than $270, was attributed to – depending on which side of the fence you’re on – poor governance, corrupt leadership and protracted civil wars in many African countries.

The continent was also undergoing rapid population growth while lacking any meaningful democratic checks and balances, and implementing ambitious social and public growth strategies. The crossroad again was with the economic downturn and the drop of global commodity prices. These countries have come a full circle.

Déjà vu, Africa. We are set for troubled times.

This is an extract from a working paper titled “Africa Eurobond Financing A Ticking 35 Billion Debt Bust” written by the author.

Trevor Hambayi is a PhD research fellow at the University of Bolton. This article was originally published on The Conversation.