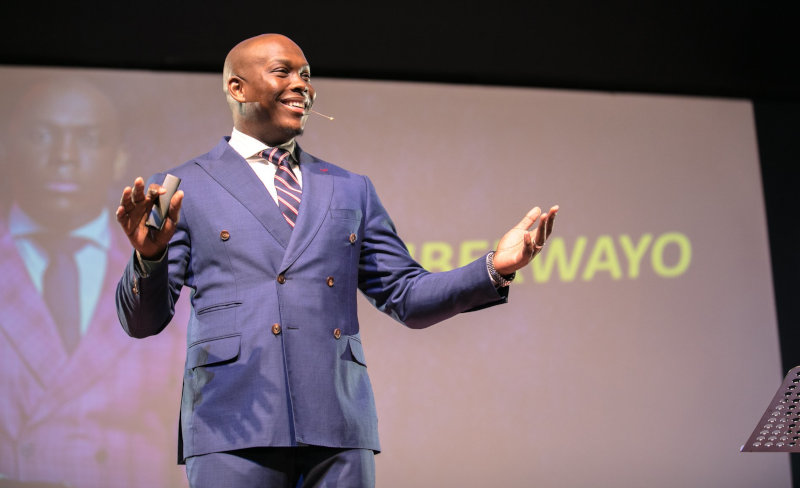 This article is a slightly edited excerpt from Knight Frank’s Africa Horizons report.

South African venture capitalist Vusi Thembekwayo highlights the opportunities on offer to investors across Africa – and tackles the tough questions the continent needs to answer before it can fulfil its true potential.

Africa accounts for a very small share of global FDI despite the huge potential of its natural and human capital. If you were talking to an overseas investor considering Africa, would you try to persuade them to make the jump?

It’s interesting you ask me that, because that’s literally the project I’m working on now. We’re busy raising a pan-African mezzanine fund that will look at highly industrialised technology. So, here’s the pitch. At a macro level, you’ve got a population that’s getting younger. You’ve got GDPs that are growing. You’ve got increases in levels of literacy and growth in the debt capital markets. All of these things fuel and are the inputs for a strong middle class.

The challenge, and this is what I say to global partners and investors, is that you have to see Africa for what it is, not for what it pretends to be. Africa in my mind is the US in the 1920s before the idea of a chicken in every pot and a car in every garage.

We have a long way to go, but I’m very excited. I always say this to global investors. There is huge opportunity in the short term for massive upside in Africa. Massive upside. But the real opportunity is in the long term. It’s buy to hold.

From your own experience creating numerous businesses and working with other entrepreneurs across Africa, what sectors and locations excite you the most?

That’s an interesting question. Africa is not a winners-and-losers economy, which the rest of the world tends to be. And the reason for that is because many of those economies have matured, so the only way one part of the economy can grow is if it steals market share from another. That’s not the case with Africa. The base is so low that all the sectors are rising at the same time. So, textiles is growing, property is growing.

If you want to move into alternative asset classes, cryptos are growing, forex is growing, financial services are growing. Then you look at IT, and that’s growing too.

In education, look at GetSmarter and its listing on the Nasdaq, and the valuation of that. You want to look at fintech, look at Stripe buying Paystack, and you get a sense of the opportunities. So, you know, this is a part of my excitement about the continent.

In Africa, for instance, you’ve got massive growth in residential housing but you’ve also got huge growth in the commercial sector. It’s not that people are migrating from one to the other. That’s not the case at all. It’s that people are interested in getting across all of these because it’s the rise of a continent that’s been in the dark for 300 years.

Are there any specific real estate sectors where you feel there are opportunities?

Social services, or what is called the cluster of social welfare, will continue to be a huge economic driver in much of the continent. This is because many governments don’t have the capacity to deliver those social services. As a consequence, they then become privatised and, because they’re privatised, there’s huge opportunity for upside.

Partners of ours, for instance, operate a healthcare fund. They’re listed in South Africa and in Rwanda and they’re seeing huge opportunities for healthcare across the continent. If you’re in financial services, again, hugely profitable.

If you’re in education, you will have to be a bad operator with a bad business model and be a bad business person to not make money. The average African mother and father believes that their children’s quality of life and their future prospects are 100% determined by the calibre of the education they receive. So for me, those three are big.

And then of course there’s the constant underdog, and she’s an underdog because it’s not a sexy industry, but it’s a hugely profitable industry if you can get the play right, and that’s the agricultural industry. So, again, other partners of ours operate food funds. They’ve just bought an asset in Kenya, which is a dairy asset. The volume growth is unbelievable.

When you have a dairy asset that can produce and distribute goods from one country to 17 others, that’s a hugely lucrative play. So, this is why I said to you, it really is a rising tide elevating all ships, and to make all of this happen, a new asset class that will be doing exceptionally well is logistics, freight and transportation.

Do you think the pan-African free trade agreement that’s recently been ratified is going to create more opportunities for intra-African trade, so Africa doesn’t have to rely quite so much on the rest of the world?

Absolutely. I do. I think the Africa free trade agreement is a fantastic start. It really is. I only have one worry. What you really need is for individual regions and economies to collaborate where they have comparative advantage, not cannibalise each other. So, there’s no point developing a huge industrial textiles centre in the east and then the west of Africa tries to do the same thing.

If you think about Africa as a single market area, in my mind there’s a real opportunity to say, “So how do we collaborate in the value chain that would mean the rise of Africa?” If you get into that, then what happens is you build an entire value chain of opportunities that can really elevate all the other parts of the continent.

Can you predict what the future holds for Africa in this next decade?

That’s a very good question. I think there is a low road and a high road. The low road is a continuation of the vested interests in North America, Europe and Asia that uses Africa as a place from which to extract talent and raw materials, and by so doing not allowing the continent real opportunities to grow into her own stride.

It will perpetuate the strong man syndrome. It will create social instability. It will continue to create mass migration, as Europe has seen recently, and sooner or later become a problem for the rest of the world. So, that’s the low road. That’s one scenario.

The other scenario, the high road, is that Africans themselves create an agenda for Africa. Last year, I travelled to this incredible place, it’s a slave island off the coast of Senegal. I get goosebumps just thinking about it. Going through that experience and realising the voyage that slaves were put through and the period of time over which slavery happened, and then the realisation that slavery happened because in part it was facilitated by Africans, that there were Africans living here who were trading their brothers and sisters, selling them off to the rest of the world.

I realised then that is the danger of an Africa that doesn’t have its own agenda. It is open to being exploited. This is why, when you asked the question about the free trade agreement, I said it’s a good start. The real question is whether we can see each other as a single economy. Because if we can, then it means we have to have the ability as Africans to have deeply uncomfortable conversations.

I am excited. Do I think it’s possible? Dare I say, I don’t think it will happen in yours and my lifetime. But I do think it’s worthwhile for Africans themselves to really think how they build a home that they can be proud of, that can stand head and shoulders with its peers, the world over.