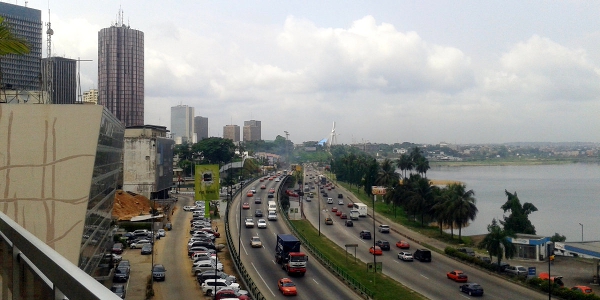 Lit by an elaborate display of orange lights, one of the three colours of Côte d’Ivoire’s flag, the city of Abidjan ushered in 2016 with a spectacular fireworks display. For 25 minutes revellers in the commercial capital that calls itself the “perle des lumières” (pearl of lights) were treated to dazzling displays of colour in the sky above the Ebrié Lagoon.

On the lagoon shore, in the towering hotels along the shallow waters and in the Treichville Cultural Palace, some of the Ivorians Africa Renewal talked to were upbeat and hopeful for a good year ahead. The celebrations apparently captured the mood in the country and the official narrative is that Abidjan is now “back in business.”

“Pheno-me-nal!” was how Fraternité Matin, the main daily newspaper in Abidjan, described the fireworks show. But beyond the fun and the dazzling fireworks, there are signs that Babi (as Abidjan residents affectionately call their city) is getting back its lustre and rebuilding its infrastructure in dozens of construction sites across the city.

The combined effects of an armed conflict, which began in 2002, and an intense post-election crisis in 2011 left much of the city infrastructure dilapidated. The swift completion in 2014 of a much-needed bridge on the Ebrié Lagoon was the first sign of the city’s renewal. Construction of the bridge had been delayed for almost two decades.

Linking the north and the south of the city, the 1.5 km toll bridge saves commuters hours they would have spent in slow-moving traffic. In early January 2016, for example, after a holiday weekend, a rush-hour 17-km ride to the airport from the Deux-Plateaux area of Cocody took just 35 minutes; in the past such a distance during rush hour would have taken two hours or more.

The new Henri Konan Bédié Bridge, named after a former president, and its connecting bypass on the Valéry Giscard d’Estaing Boulevard in Marcory are other major infrastructural developments. New hotels under construction and old ones being rehabilitated are part of the city’s urban renewal programme.

A growing number of foreign travellers are once again flocking to the city, attracted by the country’s economic performance. In 2015 Côte d’Ivoire posted an economic growth rate of about 8%, according to the World Bank. The economy is forecast to maintain the same rate in 2016.

The African Development Bank’s (AfDB) decision in 2013 to bring back its headquarters from Tunis to Abidjan was considered one of the earliest signs of international institutions’ renewed confidence in Côte d’Ivoire.

The AfDB, which helped finance the new bridge in Abidjan, along with the World Bank, the ECOWAS Bank for Investment and Development (EBID), the China Exim Bank and several French companies, has invested heavily in infrastructure financing, including for road rehabilitation and construction.

With the economic boom and the city’s growing influx of expatriates, and a flourishing middle class with disposable income and a willingness to spend, the service industry, including restaurants and high-end retail shops, is picking up. In December 2015 a new 20,000-square-metre shopping mall opened in the southern neighbourhood. Named the PlaYce Marcory, the mall comprises 55 shops, in addition to a hypermarket and a food court. The shops include a Carrefour hypermarket, the first branch of the French retail and grocery group to be opened in sub-Saharan Africa, and branches of L’Occitane en Provence, an international skin care and fragrance retailer, and Brosway, an Italian jeweller.

“PlaYce represents something good for Africa. It shows that Africa has now entered the consumption market,” trade minister Jean-Louis Billon said at the opening.

In its golden days during the 1980s and up to the early 1990s, Abidjan, with its towering skyline and surrounding lagoon, was often referred to as “the Paris of West Africa” and its business district “the Manhattan of West Africa” because it was considered one of the foremost African cities in terms of fashion, culture and the standard of living. To many, the opening of a shopping mall with European and American brands is proof that the city can now rival the trendiest world capitals in fashion and quality consumer goods.

“Let me tell you,” Sonia Ngoyet told Africa Renewal, “the quality and taste of the burger or the hot dog at the food court is as good as the ones I’ve tasted in Europe. Having a Burger King here in Abidjan is just fantastic.” Ngoyet and Christelle Amou, both salespersons at the Aseke Oro Jewellery store, one of the locally owned stores in the mall, said they were happy to be working at the mall.

Aly Diallo, a regional correspondent for the state-run Fraternité Matin, travelled from the countryside to spend the holidays with his family. He went window-shopping and ended up buying a few items from the French Carrefour hypermarket. But what he wanted most was to have his picture taken in the mall to show that he “was a part of history.” After trying a few photo spots, he finally settled for a clothing store with a huge photo of the Eiffel Tower in the background. “A very fitting spot,” he said, striking a pose. “The developed world has come to Babi and I need to show people that I was here.”

Yet despite the festive New Year’s celebrations, chronic problems of income inequality continue to fester. Gbich, a satirical and arguably the most popular news magazine in Abidjan, carried a headline: “Before we knew it, 2015 is over. Yet we have nothing to show for it.” Not all Ivorians have shared in the nation’s new wealth. “Some of us are left behind,” Anselme Kouadio, a street hustler on Rue des Jardins in Cocody, complained. “Talks of bridges and roads being built don’t fill the belly. Real jobs are what we need, so we also can enjoy what the city offers. But unfortunately, they are few and far between for young people like us.”

Even the World Bank observed in 2015: “There are disparities in access to basic services, and gender disparities across wealth and urban-rural groups”. It is estimated that only 57% of the Ivorian population had access to clean water and improved sanitation by 2009, far below the 81% target of the MDGs”.

A recent World Bank report, The Might of the Elephant — Benefitting from Strong Growth to Create Better Jobs, says about 9 out of 10 young graduates are still struggling to make a decent living.

Campaigning in 2010, “President Ouattara promised to create a million jobs for the youth,” Kobri Borgia, the editor of the biweekly La Tribune de l’Economie told Africa Renewal. “Five years later, the jury is still out,” he says.

Again in 2015, President Ouattara pledged to make youth employment a priority for his last mandate. While time will tell, Borgia asserts that “making sure the strong economic growth works for all, including providing employment, is key to Côte d’Ivoire’s sustainable growth.” The World Bank report came to the same conclusion.