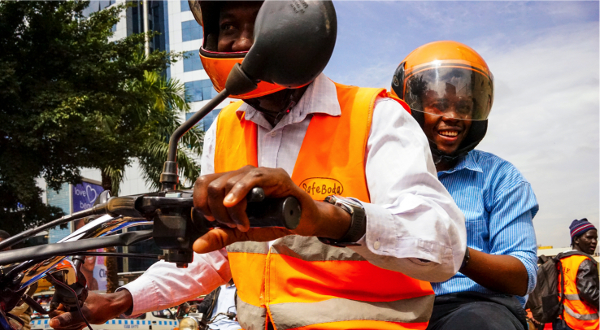 With boda-boda accidents contributing to 40% of all trauma cases, SafeBoda connects customers with drivers that have been trained in road safety, customer service, motorbike maintenance and first aid.

Boda-bodas (or motorbike taxis) are a part of everyday life for many Africans. And in Uganda’s capital Kampala it is no different, with some estimates indicating well over 100,000 boda-bodas are operating in the city.

However, they come with huge risks.

According to a 2010 study by Mulago Hospital, boda-boda accidents contribute to 75% of traffic-related trauma cases. This suggests a need for a safer boda-boda experience, and that is exactly what a new start-up is trying to build its competitive advantage around.

Launched in November 2014, SafeBoda connects customers with drivers that have been trained in road safety, customer service, motorbike maintenance and first aid through a partnership with the Ugandan Red Cross. Drivers also provide passengers with road-worthy helmets, which the World Health Organisation estimates reduces risk of death by 40% and severe injury by 70%.

It typically costs passengers the same amount to use a SafeBoda taxi as it would to use any other boda-boda hailed on the street. Drivers then pay a subscription fee to be part of the service.

The company already has close to 100 drivers, with ambitious plans to grow to 1,000 by the end of the year.

SafeBoda makes use of a mobile phone app that connects its users with the company’s closest drivers. While the service has been likened to Uber’s, there are a number of differences – a result of specific market needs.

For example, currently all payments are made by cash, rather than through cards. According to Alistair Sussock, one of three co-founders of SafeBoda, it doesn’t make sense to build a service around card payments when its penetration is so low in the country.

“It’s a very cash-based model right now because that’s what is has to be. But obviously people here use mobile money a lot,” he added. “So we are looking at [incorporating] that in the next three to five months.”

The app is also a simpler technology. Customers can use it to locate a SafeBoda driver closest to them, which they can then call to organise the pick-up details and negotiate a fee. Unlike Uber’s technology, the app does not use maps. One reason behind this is to save on data usage, which remains expensive for the majority of Ugandans. Another is the lack of a reliable physical address system in some areas.

“It is a very simple app that was deliberately designed for the market here… and it deliberately does not have a map on it like Uber does, at this stage, because Ugandans don’t use maps that frequently,” explained Sussock.

“But we are developing our tech platform and we have a newer version of the app which will come out soon. It will [allow] customers to rate drivers and some other functionalities too – like a ‘log in’ functionality so we know who our customers are and they can share their experience as well.”

Sussock reckons around 20% of people in Kampala use smartphones, with adoption growing fast. However, only around 15% of SafeBoda’s business is directed through the smartphone app, with the rest coming from the traditional boda-boda taxi “stages” located across the city. SafeBoda drivers are clearly identified and customers can usually find one waiting at one of these stages.

“[Boda-boda stages] are kind of the life of the city – that’s how people get around. So we need to work within that structure.”

At the moment the service is predominately located in central-northern Kampala, and Sussock said  the goal is to capture the entire city before moving into other locations. He noted there is a long waiting list of drivers who want to undergo the safety training and join the service.

“And then we are looking at a number of countries that also have a strong motorcycle taxi market – there is a big presence in East Africa like in Tanzania and Kenya.”

There are also millions of motocycle taxis across the rest of the continent that present further opportunities, he added. “So we kind of want to start there.”