It is hard to escape the images of “Konza City” in Kenya. Advertisements promoting the future high-tech hub, or “technopolis,” appear daily in the country’s newspapers and show regularly on the state television network. 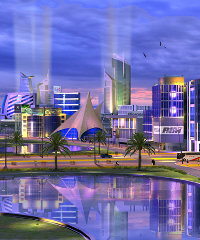 An artist's impression of the proposed Konza City development.

The ambitious plan is the work of Bitange Ndemo, the permanent secretary of Kenya’s Ministry of Information. A scale-model in the corner of his office shows off the grand scheme. Konza City will have its own international financial district, office buildings for technology companies and innovation labs, as well as manufacturing plants, artificial rivers and eventually homes, schools, churches and mosques.

The Kenyan government bought a 2,000 hectare plot of land for the project about 60 kilometres from the capital, and is now seeking to hire a master developer to find investors and arrange the construction. The project will come together in two phases and will take about 20 years to complete.

Inspired by his visit to Silicon Valley in the United States, the home of the US high-tech industry, Ndemo says the project aims to attract international investors who either cannot find space in overcrowded downtown Nairobi, or who cannot find buildings that meet their standards. Underscoring the urgency of his point, on the day he spoke to VOA, a blackout had hit downtown Nairobi and the building housing the Ministry of Information was running on a back-up generator.

“It doesn’t take much to understand this project if you have lived here longer, because working in the city centre here is such a mess,” he says.

Promoting the information technology (IT) industry is one of Kenya’s key development goals in the coming years – part of an ambitious agenda known as Vision 2030.

Kenya’s IT industry has been on a major upswing in the past few years, driven largely by advances in mobile phone technology. The World Bank says mobile phone subscriptions in Kenya rose by more than 25% between June 2010 and December of last year, while internet users increased by 60%. Kenya is also the birthplace of the world’s first mobile money transfer service, M-Pesa.

As in the original Silicon Valley, much of Kenya’s homegrown innovation is taking place inside small tech communities and social groups. The most well-known is called iHub, a meeting space, coffee shop and workshop in Nairobi where software developers, engineers and other creative minds come together to brainstorm new ideas.

In a sense, Konza City is an attempt to capture the creative community spirit on a larger scale and to include some light manufacturing capacity as well. Erik Hersman, the founder of iHub, is cautiously optimistic about the plans.

“I think it is viable, but it’s not just about building it and they will come. It’s providing all the other incentives that are needed to make it a really attractive location,” he says.

The other challenge, Hersman says, will be keeping it “tech focused”. He says that when developers get in there “they’re going to start selling space to whoever will pay them”.

Konza City is expected to cost about $10 billion, which will be funded mostly through public-private partnerships, with the Kenyan government footing up to $1 billion of the bill for new infrastructure.

Some major technology companies have announced plans to expand their businesses in Kenya. The US-based computer company IBM announced plans this month to establish an innovation hub in Nairobi to increase its exposure in Africa. In February, Finland’s Nokia said it too would fund a research centre to support local developers. Ndemo says companies like these have expressed interest in Konza, but it is a little too early to say who, if anyone, has actually committed.

The general manager for Microsoft in east and southern Africa, Louis Onyango Otieno, has been on the job for 15 of Microsoft’s 16 years in Nairobi. He fully supports the idea of Konza City, but says Microsoft has not decided whether it will buy in.

Otieno has no doubt that innovation will continue to thrive in east Africa, Konza or no Konza, and says attracting investors is like collecting iron with a magnet.

“If that facility, or that initiative is designed to enhance the goals of a private investor, it’s a no-brainer, they will go,” he says.

Konza is not the first attempt at a planned city in Kenya. A $5 billion residential project called Tatu City was supposed to break ground last year. But the deal has been held up in court by a lawsuit between developers and shareholders.

Konza City was supposed to break ground in April of this year, but it will also be delayed as the government continues to look for a master developer. It will be at least a year before the first buildings go up.

This article was first published on VOA.