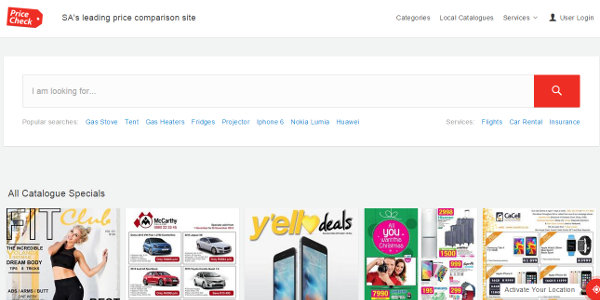 Launched in 2006 in South Africa, Tucker sold PriceCheck to Naspers in 2010. In 2013 it expanded to Nigeria, and has since grown to list over five million products and receives 25 million unique visitors annually.

The acquisition of PriceCheck from Naspers will see Tucker become the platform’s new CEO. The acquisition is being done through a partnership with Silvertree’s subsidiary Click n Compare, another South African-based comparison website with a focus on the African market.

Established in 2013, Click n Compare focuses on products that have traditionally been difficult to compare side-by-side on both price and specifics, such as insurance, mobile phones and contracts, broadband, banking and travel. This year it expanded to Nigeria and Kenya under the brand CompareGuru.

According to Silvertree’s founding partner, Manuel Koser – who is an ex-Rocket Internet employee who founded the e-commerce site Zando – there is considerable potential for online price comparison sites in Africa. This is in part due to the mistrust that still surrounds online shopping.

“E-commerce, or just generally online purchases, is still a very young industry and very new to the African market, even to the South African market. So you need to build trust which I think this is one of the biggest things.”

He added that what makes companies such as PriceCheck and Click n Compare so attractive for investment is the power they have for nurturing trust and credibility around purchasing products online. With informal retail still dominating on the continent, he argues that online shopping, through these platforms, can provide consumers with a quick and easy discovery tool to browse for products such as fashion and electronics.

“There is no reason why e-commerce or online purchases should not be on the same level as the UK, where close to 20% of retail is happening online. South Africa is still below 1%. Nigeria is somewhere around 0.2%-0.3%. But in my mind there is no reason why Kenya, Nigeria and South Africa should not be at the same level as the UK. The question is when,” he continued.

“It could be two years, or it could be 10 or 15 years. It depends on macro-economic factors but also on micro factors like if something like PriceCheck helps build trust in the market.”

Nigeria’s insurance market is of also particular interest to both companies. Unlike South Africa, car insurance is mandatory in the continent’s largest economy, although not always enforced.

There is also very little established competition in the African market, and Koser said the PriceCheck team is looking at expanding into Kenya where Click n Compare is already establishing its presence.

“But at the moment we are more focused on digesting the acquisition and getting the teams to work together. We have changed the strategy operationally quite a bit at PriceCheck in terms of the core focus. So that is key, and then country expansion topics will pop up beginning of next year.”