The growth of supermarkets and restaurant chains across Africa is opening up opportunities for farmers and entrepreneurs to supply these outlets with quality agricultural produce. 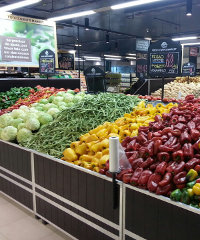 Earlier this year, American entrepreneur Christopher J. Bak, who runs a number of Subway franchise stores in Tanzania, explained how difficult it can be to source lettuce for its sandwiches. “In Dar es Salaam, I pick up the phone and order 50 kilos of lettuce and the supplier only brings me five kilos because its rainy season and his truck couldn’t make it into the city. So I spend four hours driving around town trying to buy up every head of lettuce from every duka (Swahili for ‘shop’) on every street corner in the largest city in the country,” he told How we made it in Africa.

Fried chicken fast-food chain KFC also had to deal with these challenges. During a 2012 interview with How we made it in Africa, Keith Warren, KFC’s managing director for Africa at the time, noted that in some African countries KFC burgers did not have lettuce on them. This was not to cater for local tastes, but because KFC couldn’t source lettuce in the qualities and quantities it required.

Warren said that in many cases growth is being held back by inadequate farming capacity to supply the company with chickens and vegetables. Warren used the example of Nigeria. “The only limiting factor we’ve got in Nigeria right now is actually chicken supply, and finding suppliers who are able to meet our global quality standards in sufficient quantity. The commercial chicken industry is horribly underdeveloped.”

Another company that has highlighted the opportunities for local farmers to supply produce to its outlets across the continent is South African fresh food retailer Fruit & Veg City. The company has expanded into a number of African countries, including Zambia, Zimbabwe, Angola and Mauritius, with stores in Ghana and Mozambique expected to open soon.

Although the company acknowledges that it is likely to continue to export substantial quantities of produce from South Africa to its various stores on the continent, it is eager to buy from local farmers to counter high export costs. “We do have to develop the local farmers, we do have to develop the local suppliers… because of duties, because of transport costs… We want to give local people the best shopping experience, but with the best possible prices,” said Frans van der Colff, general manager of Fruit & Veg City’s operations in the rest of the continent, at a recent conference in Cape Town.

“We can make a meaningful difference to the local farmers… We sincerely believe that agriculture is one of the corner pillars of our beautiful continent,” Van der Colff added.

He gave an example of a small-scale butternut farmer in Zambia that had to buy another piece of land to keep up with demand after she started supplying to Fruit & Veg City. In Zimbabwe, there is also a farmer right behind a Fruit & Veg City outlet in Harare that sells all his produce to the company.

In the rest of Africa, Fruit & Veg City mainly focuses on its Food Lover’s Market brand, which offers a mix between on-site consumption and retail. Food Lover’s Markets are usually situated in major shopping malls or on busy high streets.

Fruit & Veg City is also planning to introduce wholesale outlets in Africa that will focus on selling food products in bulk to traders. Van der Colff said there are opportunities for these stores on the border between Zambia and the DRC, as well as in Kumasi, Ghana.

When the company first opened a Food Lover’s Market store in Lusaka (Zambia), there was a concern about whether the sushi section would work. According to Van der Colff these fears were unfounded. “[The sushi section has] double the participation of any of our stores in South Africa… And when I sit there and watch who’s eating, it is 70% local people… that is what Africa is all about at the moment.”