American entrepreneur Christopher J. Bak is set to bring Subway – a US restaurant franchise that primarily sells submarine sandwiches and salads – to Kenya in August. His firm, Liberty Eagle Holdings, runs two Subway stores in Tanzania and intends to develop up to 20 outlets in the region over the next five years. Bak told How we made it in Africa’s Dinfin Mulupi about his decision to move to Africa, his experience of doing business in Tanzania and why, even with the challenges, operating in East Africa still makes sense. 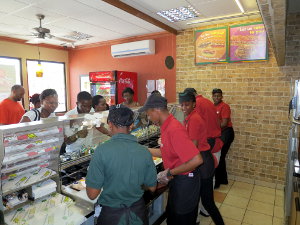 A Subway outlet in Tanzania.

How did you end up doing business in Tanzania?

My background is in finance. I had been living in New York, working for an emerging market hedge fund and was covering Africa for them. I had been looking at deals all over the continent, but mostly in West Africa. In 2008, just before the recession, I decided to move to Africa. What we were doing at the fund was very high level: primarily fixed income, which is something you can do from New York for Africa. However, when you want to get into the more interesting opportunities it is just not possible to do it from New York. For me, East Africa was more compelling than West Africa from a quality of life perspective, so I moved to Tanzania to work with an advisory firm that largely focused on regional cross-border acquisitions. After moving to Dar es Salaam I started looking at the restaurant space.

Why the food business?

Lots of companies are focusing on Africa’s emerging middle class. Telecoms and financial services are obvious demand sectors for new consumers, but they require hundreds of millions of dollars of investment. The next level of consumer spending is retail, particularly in food. Consumers here want the same experience as consumers anywhere else in the world: the ability to buy a quality product at a fair price, while having an enjoyable customer experience. The customer experience element is the biggest gap in Tanzania, and this is something that Americans have excelled at globally. Subway, at the time, was the only international brand in Tanzania. Subway has been in the Tanzanian market for 13 years and there are currently six stores, two of which we own.

What experience have you had doing business in Tanzania?

When we used to briefly characterise Tanzania to US-based investors, we would say that the country had similar levels of development and institutions as a number of the post-conflict markets that we covered, without having the emotional scars of recent fighting. It is predominantly the socialist experience that slowed things down in Tanzania. The biggest challenge we face today is in finding quality counterparties like suppliers and landlords.

In the US it is easy; you go to one website and order everything – from cleaning supplies to chicken breasts – from one distributor, and it comes on one truck within a pre-determined delivery window. In Tanzania, we have more than 15 suppliers of tremendously different quality. There are lots of structural hurdles that Tanzania has to overcome. Power, for instance running the generator, is a huge expense for us. When I look at our staff today, they have great potential when provided with the right training, but the existing educational system has largely failed them. But the experience is certainly not all negative. Our newest store is already serving similar numbers of customers as a restaurant in the US, proving that Tanzanians are willing to spend if you can offer them a healthy, international-quality product, served by friendly staff in an inviting space.

You are expected to expand to Kenya this year. Tell us about that.

We plan to open our first store in August. We are actively looking at a number of other locations in Nairobi, and expect to focus our development on the capital for the time being. Expanding beyond Nairobi is very expensive from a supplier cost and quality perspective. Our goal is to open three stores in Nairobi this year and hopefully do three to four stores every year after. The purchasing power is a lot stronger in Kenya than it is in Tanzania and the supply chain is a lot better, but it is nowhere near where it needs to be. Subway is the largest purchaser of lettuce in the world, but it is not easy to source lettuce in Tanzania, especially in the rainy season. In Kenya, it’s easier because there are some greenhouses that supply UK supermarkets, but consistency and quality are still issues. We can open 20 stores in Kenya in the medium-term, once the supply chain allows us to offer our fresh subs and salads at the right price. Currently, our input costs are a lot higher in East Africa, particularly for meats, than they are in other markets.