How we made it in Africa talks to Nils Flaatten, CEO of Wesgro, the trade and investment promotion agency of South Africa’s Western Cape Province, about why West Africa is a good market for exporters 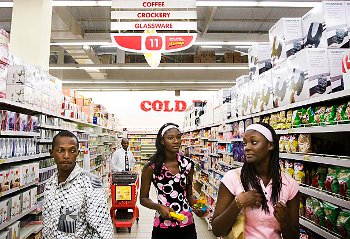 You are very positive about the export opportunities that West Africa offers to South African businesses. Why should this region be taken seriously?

Well I think an analysis of the global economy is an important one at the moment. If you look at Europe, it is forecasted that the continent will have 0% economic growth over the next two years. If you look at the United States, it is quite clear from the data that is coming out that the US economy is soft. So there are a couple of implications here.

In Africa, on the other hand, there is a new economic growth happening. In Cameroon, for instance, during 2009 when the global financial crisis hit us, our exports from the Western Cape increased about 68%.

At the moment there is an oil boom happening on the west coast of Africa. There is also a commodity boom that is developing where primary goods are being exported out of the continent, mostly into India and China. All these developments, coupled with the democratic dividend, make doing business with West African countries a priority.

The Western Cape is a springboard into the west coast of Africa, from Namibia and Angola, right up to Nigeria, and then cutting across to Ghana, Cote d’Ivoire, Senegal and even Sierra Leone. There is a natural linkage with us and the rest of the continent. As these economies expand and their middle classes grow, there will be a shift for consumer products.

Which products produced in the Western Cape has the best potential to be exported to West Africa?

I think there are a number of products. If you look at the crude oil that we import and refine in the Western Cape. We obviously use the petroleum for our own consumption but there are a whole bunch of by-products that come from that – synthetics, lubricants, etc. I think that is a huge export opportunity.

On the building materials side, the infrastructure development happening in these African countries holds potential for the export of products such as steel, cement and metal pipes.

Looking at food products, there are huge opportunities. We’ve already seen a spike in the exports of wine and spirits.

There is also a demand for some of the clothing that we produce here, such as shoes and high-end apparel.

Another opportunity would be to export services to these countries. In the Western Cape we have a high number of people developing software applications. I think there are some huge opportunities in this area. And then also in some of West Africa’s bigger cities they are facing some serious environmental problems, and they are looking for support and services such as water management and dealing with the impacts of climate change.

You mentioned that the Western Cape could be a springboard for companies to do business in the rest of Africa. Tell us more about this.

There are a couple of changes that happened over the last year. One of them is the change in tax rates for headquarter companies in South Africa doing business on the rest of the continent. The government dropped the stringent requirements for setting up such companies, and also introduced tax reliefs. So from a financial point of view it makes sense to set-up your head office here.

From an operating platform, you have to look at what’s happening in the individual economies. West Africa’s oil & gas sector has just taken off. If you look at the global dock yards that build and service oil rigs – there are only three of them in the world, based in Aberdeen, Houston and Singapore. Now they don’t have enough space to service the new rigs, so we are positioning the Western Cape as a service centre for them. The rule of thumb is when a rig enters the port of Cape Town for six to eight weeks they are contributing about R200 million (US$29 million) to our current account.

Then if you look at some of the supply chains, there are new supply chains that are developing from the Western Cape to the west coast of Africa. We’ve got a German shipping line here and a Scandinavian shipping company has recently also set-up operations in the Western Cape. Using smaller ships, they are doing shorter runs into Africa. DHL has also relocated its Sub-Saharan Africa head office from Johannesburg to Cape Town.

So I think having your senior people here in the Western Cape makes sense. It is also a lifestyle choice. Cape Town is an easy place to live in. The fact that we are roughly in the same time zone as the rest of Africa is another advantage. Expats also have access to very good schools and health care in Cape Town – these are things that their families really take seriously.

In addition I also think there is a bit of a Pan-African solidarity happening. I’ve heard of a story where an oil rig had to go in for repairs, and one of the African countries said, “Look we don’t care where you repair it, but make sure it is done in Africa”.

From what you are seeing on the ground, how enthusiastic are companies in the Western Cape to get their products into the rest of Africa?

I think there are pockets of excellence. There are people who have picked-up on this opportunity, have done their homework and already doing business. I do, however, think there is a bit of a knowledge gap among a number of players. They always look to traditional markets such as Europe and are most probably now focusing on India and China. So it is really an awareness process that you’ve got to drive.

People are starting to realise that it is easier to do business on this continent than in India or China. The market access into India is extremely difficult. Market access into China is not that difficult, but it is an extremely crowded space. Africa is that one environment where it is a lot easier to establish the contact and get the trade flow going, but there is work to be done.