Carolyn Carew, founder and CEO of South African film and television production company, Born Free Media (BFM), is an award winning executive producer and entrepreneur. With over 25 years extensive experience, Carew tells How we made it in Africa what it takes to make it in the film and TV business in Africa. 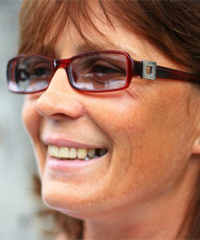 “Sometimes you have to be incredibly resilient and very strong, to be honest – it’s very demanding, with long hours,” she answered with a sigh. “And running your own business is not easy.”

Having started the company in 2005, Carew, like most entrepreneurs, has struggled with time, or rather the lack of it. “Your time and your planning are so critical but there is so much work that is required to be submitted, so much paperwork and so much documentation.”

Carew sort of fell into the industry after university in 1987 and hasn’t looked back. Having studied sociology and human resources management at the University of Cape Town, she struggled to find a job and ended up working as a social worker in Cape Town. Her sister, who was working in wardrobe on a film called African Farm, found her a job as a driver. “And that is how I started, as a driver, driving actors.”

From there, Carew said she worked her way up to an assistant director position and then moved into production. “Then eventually I went into commercials and that’s where I really learnt my skills in the commercial sector to be honest,” she continued. “I worked with a very good commercials director and he taught me everything from pre-production through to post-production.”

Carew’s resumé is extensive. From 1992-1995 she was the head of the Newtown Film and Television School and in 1995 became the manager of TV training at the South African Broadcasting Corporation (SABC), a position she held until 2000. She was also a council member on the inaugural National Film and Video Foundation board from 1999-2002. Towards the end of 2000, she took on a position as head of the TV unit for loveLife, a youth social marketing campaign that focuses on HIV awareness and education.

Soon after starting BFM, she became the producer for Broadcast HIV Africa, a coalition of pan-African public and commercial broadcasters across the continent who dedicate 5% of their time towards HIV programming. Since 2006 it has grown from 23 member countries in Africa to 38 and offers a necessary dialogue across the continent that hadn’t existed before.

While Carew is clearly devoted to her passion, she has to struggle through the challenges faced by the film and TV industry in South Africa. For starters, finding investors for productions – particularly film – is never simple.

“If I go look for equity finance and I ask potential investors to invest, [they see that] the risk is so high because the returns are so low… it is not an easy industry to be able to sell and say to people ‘well look, this is your potential return’,” she said. “Of course when you hit big, you hit big, but it is very seldom that it happens.”

One of the reasons for this is that the South African cinema audience is relatively small. “I asked Ster Kinekor about three years ago and they said the highest selling DVD was only 33,000 units and that was for Shrek 2 or Shrek 1, one of them, I can’t remember,” added Carew.

Like most consumer industries across Africa, film and TV production is being transformed by the needs and behaviour of the young African consumer. “I think that one needs to look at new media now because new media has changed the situation quite a lot because young people are accessing their stories through a different way… so I suppose as investors and film makers we need to look at how does one create an environment that is sustainable and that has a return on investment,” contemplated Carew.

However, despite these challenges, BFM has had a number of successes. In 2006, the company produced the mini drama series When We Were Black which won several prestigious South African awards, as well as a number of international awards such as the TV and Video Prize at the Pan-African Film and Television Festival of Ouagadougou (FESPACO) and the best drama award at the 2008 Reims International Film Festival in France.

So what sells to African audiences? “Entertainment is always what works well for TV, because your audiences are young,” explained Carew. “Your reality format, your make-over, you know, that sort of thing does very well. Obviously dramas do very well. Local dramas are always one of the highest rated in terms of audience ratings.”

While Carew said that there is a need for development within the industry across Africa, she has also witnessed huge potential in terms of both talented actors and technicians with the skills needed to generate quality productions. “Kenya is doing exceptionally well; Nigeria is a huge industry; Ghana is not a bad industry either,” she said. “So there are pockets on the continent where the industry is strong and very vibrant as well.”

Carew believes perseverance is needed to make it in the film and TV production industry and despite the barriers, the executive producer shows no signs of slowing down. “At the moment I’m working on an international documentary called A Letter to Nelson Mandela with my business partner and director Khalo Matabane, and for that we currently have international broadcasters like the BBC and we are talking to one or two others that have come on board.”