Mining companies in Africa should invest in infrastructure development to win the support of the local population and to mitigate political risk, says Bernard Sheahan, the International Finance Corporation (IFC) director of infrastructure and natural resources for Africa and Latin America. 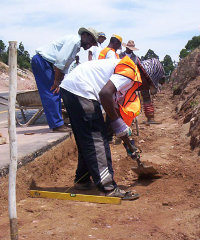 Infrastructure investment could be an opportunity for mining to enhance its development impact.

While Sheahan said that Africa is set to become the IFC’s top investment destination within three years, he told top delegates at last week’s African Mining Indaba in Cape Town that the IFC believes that political risk on the continent is likely to rise, along with the demands of local communities. With violent labour disputes in several countries, including recently in South Africa and Madagascar, and uncertainties over licences, taxation, and talks of resource nationalism, the continent’s risks remain high for investors in the mining sector.

“We believe [at the IFC] that a focus on economic development in its many forms is the best strategy to mitigate that risk,” stated Sheahan.

Africa’s infrastructure deficit, as well as its lack of skills and jobs, were described by Sheahan as being both a challenge and an opportunity to reduce political risk and contribute to economic development.

“The core to the challenge, I would suggest, is how you use this infrastructure challenge as an opportunity for mitigating political risk,” said Sheahan. “Africa’s infrastructure deficit is both a potential bottleneck for mining development and a development challenge. There is increasingly an overlay between the geography of mining deposits and where there is lack of available transport, power and water. Multi-use infrastructure can be an opportunity for mining to enhance its development impact on countries and regions for the long term as they serve as critical anchors for road, rail, port, water, power and even telecommunications investment.”

Sheahan added that this idea of large-scale, multi-use infrastructure – largely funded by the private sector – is something that the IFC has started to focus more on.

“We have seen, again in our investments [at the] IFC, the picture changing quite radically in the last couple of years,” continued Sheahan. “From a region where we could find opportunities to invest, at best, US$2-3 hundred million a year in supporting privately-funded, privately-run infrastructure, in the first six months of our current fiscal year, IFC has already invested over US$1 billion in power and transportation projects in the region. But in this broader positive context, the multi-user, large scale infrastructure – that is increasingly going to become important for mining developments – is a particular challenge.”

A possible model for this is around greenfield, shared-use, public-private partnerships (PPPs) relying on an anchor mine, according to Sheahan. An example of this is Rio Tinto’s multi-use transport investment plans in Guinea. “The economic effects around such multi-use infrastructure can be enormous, perhaps stimulating as much GDP growth as the infrastructure itself.”

Sheahan said that a similar approach to Rio Tinto’s multi-use transport plans can be thought of in power generation. “Through over-dimensioning power generation facilities for the use of mining developments, it can then be used to connect either to [local] communities, provincial grids, or to the national grid,” explained Sheahan. “These types of infrastructure investments will create many winners around a mining investment. Not just the government which benefits fiscally and not just the community near the resource but geographically dispersed actors in many sectors will also benefit. Those winners will want to see the mine succeed and will want to see the mine’s activities continue. And that, we believe, is one of the most effective forms of political risk mitigation that we know.”

Other than skills development and job creation, Sheahan said that local procurement is another area where the mining industry can contribute to mitigating risk, adding that a holistic approach is needed to local sourcing.

“Local procurement is an important aspect of this employment challenge. Some numbers we have come across from around the world show the benefits for economies of local procurement can be very significant.”