Africa has become a key attraction for international technology companies due to the continent’s fast mobile and internet revolution in the last decade. US companies such as Microsoft and Google, as well as Asian device manufacturers such as Huawei and Samsung have invested in the continent, each angling for a piece of one of the most rapidly expanding technology markets in the world. 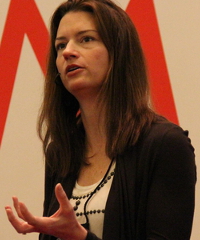 Evernote, a Silicon Valley-based company that offers products which help users “remember everything”, is the latest in a line of global companies seeking to expand into Africa. Founded in 2008 by Russian-born American entrepreneur Phil Libin, Evernote is today valued at more than US$1bn. Evernote has a collection of apps that help users capture and save a wide variety of data including notes, audio, photos and web pages across all devices.

Linda Kozlowski, vice president of international marketing at Evernote, told How we made it in Africa that the company, which currently has 75m users world-wide, is seeing potential to grow its user base in Africa.

Kozlowski said the company’s interest in Africa is mostly driven by the growth of knowledge-centric businesses in the continent.

Evernote hopes to tap into Africa’s burgeoning startup community by building a network of developers who are often “early adopters” of the firm’s products.

Working with local developers is one of the company’s international expansion strategies. Kozlowski said Evernote currently has 30,000 developers globally in its application programming interface (API) community.

One of the challenges the US company expects to face in Africa is how to engage with the developer community across the continent. Kozlowski said figuring out “where to start and who are the best people to work with” will be a time-consuming process.

“Our biggest challenge is connectivity. We are an application that syncs across multiple devices using broadband… that infrastructure is really important to us. The areas where that infrastructure is more built out is going to be a much more natural place for us to grow Evernote,” she said. “The other [challenge] is just the sheer size [of Africa]. There is a lot of ground to cover. It will take us a little bit of time.”

Kozlowski advised other international companies expanding into Africa to “listen” to the market and incorporate feedback from users in improving their products.

“It is very common especially for larger companies to come in and say ‘this is how we have done it in the rest of the world, this is how we are going to do it here’. It never works.”

For global technology companies expanding into Africa, Kozlowski said, finding the right people to work with “is a number one priority”.

“Given that the skill set in Africa is still growing around technology, finding the right people that have the skills you need and have the passion you need is going to be a challenge. But I would advise that yes, you want the skills, but go for the passion,” she said. “Go for somebody who really believes and understands what you are doing even if you have to train them because they are going to get it and they are going to help you carry it forward.”

Kozlowski said that while there is “a lot of hype” surrounding Africa’s technology sector, it is not too difficult to catch up [with the hype]. She added that Africa has an advantage because “it can leapfrog easily”.