Many have called for a Green Revolution in Africa – defined as increasing crop yields and land under cultivation. A new policy brief by the African Futures Project, however, notes that such a significant agricultural transformation would not necessarily benefit all Africans. 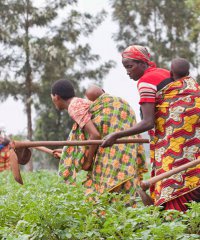 An African Green Revolution needs to be coupled with policy interventions.

The brief, written by Jonathan Moyer and Eric Firnhaber, says that a boost in agricultural production without policy interventions, could see large quantities of food being exported from the continent, resulting in increased consumption in developed countries because of lower prices, while Africans themselves cannot access the calories they need.

“Simply increasing yields and land under cultivation could lead to a world where buying steak in Europe is cheap, while millions of Africans continue to go hungry or even starve,” note the authors.

Africa currently imports more food than what it exports. The continent imports 45% of its rice and 85% of its wheat. It is also estimated that a quarter of Africa’s population suffers from under-nutrition.

International Futures software shows that a base case scenario (a situation with a continuation of past technological improvements, policy investment choices and natural resource availability) could see African farming production nearly double over the next 40 years. On the other hand, an African Green Revolution scenario could triple agricultural output – leading to an increase from just over 500 million tonnes today to over 1,800 million tonnes by 2050.

However, the brief notes that a Green Revolution consisting of merely an increase in public and private sector investment would not adequately drive human development.

“The African Green Revolution scenario would reduce the percentage of under-nourished children by 2050 by less than 1% compared with the base case. This small improvement can be ascribed to the fact that the greater part of the production increase would be exported to feed high-end consumption abroad.”

To ensure that increased food production ends up in African stomachs, the Green Revolution must be coupled with policies and programmes to increase food access and reduce the cost of food to local consumers.

The authors further note that there are trade-offs between the promotion of large-scale agricultural production versus placing an emphasis on small-scale farms.

For example, Brazil’s agricultural transformation, often viewed as a development success story, was largely driven by large agribusinesses, while smallholder farmers didn’t see many benefits. By 1996, Brazilian smallholder farmers held 20% of all farms, but only 0.3% of total farmland.

“At face value, increasing agricultural production in Africa seems like a good idea. However, simply increasing yields and land under cultivation is likely to lead to a situation where developed countries can purchase food even more cheaply, while millions of Africans continue to go hungry or even starve,” says the brief.