“We know that Britain has an agenda for Africa,” says Prof Chris Landsberg, head of the Department of Politics at the University of Johannesburg. Landsberg was commenting on the British prime minister David Cameron’s very brief trip to South Africa and Nigeria this week. 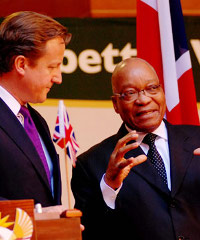 Cameron and Zuma during the UK prime minister's trip to South Africa.

Amidst huge controversy, due to the phone hacking crisis, Cameron, and one senses almost a hint of urgency, went ahead with his first visit as prime minister to sub-Saharan Africa. Cameron, however, cut his tour short by two days and did not visit Rwanda and Sudan.

No 10 Downing Street reported on Monday, that Cameron said: “I think it right for Britain to be engaged with South Africa and to be engaged with Africa as a whole. There is a huge opportunity for trade, for growth, for jobs, including jobs at home in the UK.” As part of his plan, to increase aid spending, he also promised £52 million in emergency aid to the worsening crisis in the Horn of Africa.

So officially the trip would focus on trade, which was boosted by a huge business delegation, but also on aid.

Prof Landsberg, however, suggests that Britain has more agendas. As we know now during Cameron’s meeting with South Africa’s president Zuma on Monday, the Libyan crisis was discussed. Whereas Cameron has called for Gadaffi to step down, president Zuma stood firm in his belief that the Libyan people must decide on the future of their country, and that he supported the African Union’s view against military intervention. Landsberg is of the opinion that the economic goodwill is really to “soften” Africa in exchange for political solidarity.

Prof Landsberg also suggests another reason, maybe more strategic, for the prime minister’s visit, namely ‘Chinaphobia’. It has also been coined the “New Scramble for Africa”. In the nineteenth century European powers scrambled for Africa’s resources, now it is competing with China that is rapidly extending its footprint on the African continent. According to the Guardian, nearly a fifth (17.2%) of goods imported by South Africa comes from China. Germany is in second place (11.2%) with the US in third place (7.4%). For South African exports, China again holds first place (10.3%), the US second (9.2%), Japan third (7.6%), Germany fourth (7%) and Britain in fifth place (5.5%).

Two weeks ago when the German chancellor Angela Merkel visited Kenya, Angola and Nigeria, also accompanied by German business leaders, she indicated that the mission was to promote business, and business alone. Undoubtedly also to compete with China.

David Cameron’s business delegation offers interesting reading. This motley crew was made up of blue chip companies, like Barclays, Diageo and Vodafone. Ian Powell, chairman and senior partner of the UK firm of PwC that recently announced new investment initiatives for the African continent, was also part of the team. The director of communications and public policy of the English Premier League, Bill Bush was there and Tex Teixeira from Supersport. Mark Price, managing director of Waitrose, a company that is completely new to Africa, was also part of the delegation. Then there was De La Rue, a commercial security printer and papermaker company that has a strong presence in Africa already. Stephen King from Omidyar Network, that leads the global Government Transparency investment area of the company, which makes investments in for-profit companies as well as grants to non-profit organisations, was also in the delegation.

Prof Colin McCarthy, of the Department of Economics at Stellenbosch University, has a special interest in trade and trade policy. He sees the huge business delegation as reflecting the fact that building economic and commercial ties lies at the heart of modern, post-Cold War diplomacy. He says that for Britain, South Africa as Africa’s most developed and largest economy in terms of GDP, is a very important trading partner. It can be surmised that as South African trade links shift to countries in the emerging world, it will impact on how governments and foreign business view and approach its economy.