Efforts by the US to boost political and commercial ties with Africa came under the spotlight this month when President Barack Obama hosted some 50 African leaders for the first US-Africa Leaders Summit in Washington DC. Alongside a number of discussions around opportunities for better business partnerships between the two regions, the Summit generated about US$37bn in financing deals and investment in Africa. 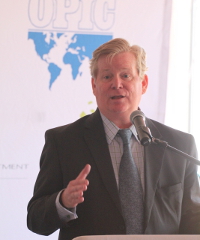 Peter Ballinger of OPIC told How we made it in Africa that Power Africa projects are good investment opportunities for the private sector, but are not without risk.

At the heart of the US commitment for better engagement is Power Africa, a private sector-led initiative aimed at doubling electricity access in sub-Saharan Africa where an estimated 600m people lack access to reliable electricity. The initial set of Power Africa partner countries – Nigeria, Ethiopia, Ghana, Kenya, Liberia and Tanzania – are said to be paving the way for investment and growth through utility and energy sector reforms.

Obama announced the initiative last year (alongside a commitment of $7bn of US government resources) during a visit to the continent. The goal was initially to add over 10,000MW of power generation capacity to give an additional 20m households and businesses access to electricity. But at the Summit, Obama announced a tripling of the original target to 30,000MW and new connections for at least 60m. He also pledged a further $300m in grant assistance a year to expand Power Africa’s reach.

Alongside this are pledges in both technical and financial support by entities such as the World Bank, African Development Bank (AfDB), Overseas Private Investment Corporation (OPIC) and the Government of Sweden.

Power Africa is already involved in a number of energy projects, ranging from a loan guarantee for the Kiwira River Hydro Project in Tanzania to providing transactional and technical advice to move the proposed Corbetti Geothermal Power Plant project forward in Ethiopia. In northern Kenya, US government finance institution OPIC has approved up to $250m in financing under Power Africa to support the development, construction, and operation of the 310MW Lake Turkana Wind Power project.

Currently Power Africa has just over 40 private sector and financial partners, with roughly a third being African. However, according to Peter Ballinger, director of business development at OPIC, Power Africa projects are complex in nature and are not for anyone to just come in and invest.

“We are really looking to work and partner with companies that have experience, have done this before, and bring something to the table whether it’s a new technology, or additional capital, or some sort of wherewithal,” he told How we made it in Africa.

According to USAID, which houses the Power Africa website, the first step in becoming a Power Africa partner would be to express interest through the website. A Power Africa team member will then reach out to discuss how best an investor can get involved.

“If there appears to be a strong fit, your organisation may be invited to provide a letter of commitment expressing your support for Power Africa and setting forth the specific activities you intend to pursue in furtherance of Power Africa’s objectives,” states the website.

The thinking behind Power Africa

During the Summit, Obama reiterated the view that Africa needs sustainable development through trade, as opposed to aid, and that the US is looking to increase commercial ties as equal partners.

The US has been somewhat slow to engage with Africa’s growth story, falling behind China and the European Union as the continent’s largest trading partners. Within 15 years, trade between China and Africa has risen from just $10bn in 2000 to over $200bn in 2013, with China’s involvement in the continent extending to the construction of large infrastructure projects such as roads and ports.

At the Summit, Jeff Immelt, CEO of GE, summed up the sentiment that US companies “kind of gave Africa to the Europeans first and to the Chinese later, but today its wide open for us”.

Both sides set to benefit

According to Ballinger, the Power Africa initiative is a win-win for both the US and sub-Saharan Africa – the continent needs increased energy generation, while US companies have the opportunity to make good returns from these projects.

“US companies [bring] experience and technology and equipment to projects. So for companies like GE, yes, supporting Power Africa was a strategic business decision on their part,” noted Ballinger.

“So American companies I think will very much benefit from the groundwork that the US government has laid through Power Africa with our Power Africa countries.”

Africa has a significant infrastructure deficit and the private sector can play an important role in closing this gap, as noted by Stuart Kufeni, CEO of the SADC Development Finance Resource Centre, which houses the Public-Private Partnership Network.

“Most of these infrastructure projects are huge and our governments can’t raise that kind of money in total, so they need the private sector’s participation in those projects. For instance, now from 2013 to 2017, we are looking at projects [in Southern Africa] in the region of US$65bn for infrastructure alone. There is no way our governments can raise that much,” Kufeni told How we made it in Africa last year.

In addition to financing, the private sector also has the expertise to develop these large projects.

At the Summit, Tony Elumelu, chairman of Heirs Holdings, said the private sector can play a key role in solving Africa’s power deficit. Nigeria recently took steps to privatise its power sector, and Elumelu said this allowed his company to acquire a major power asset last November, with a then output of 150MW of electricity. Just nine months later they had tripled this to 453MW.

OPIC’s Ballinger said the Power Africa projects are good investment opportunities for the private sector, but they are not without risk.

“Many of these projects are highly risky, and so I think investors have an expectation of rate of return that they need, certainly they also have to service the debt, long-term debt, through organisations like OPIC. And then they have got to deliver on their contract to the off-taker which in almost every case is a government entity like… TANESCO in Tanzania or KenGen in Kenya.”

The complexity of PPP deals means there can be challenges, such as meeting tight government deadlines to conclude contractual and financing agreements.

“So governments have to understand that when you are putting together a very complex public-private partnership, that giving them six months to reach financial closure… sometimes it’s too tight for international financial institutions to commit, especially on these larger energy projects, which are very complex in nature.”