A Ugandan startup is looking to change the way people transfer money from abroad by enabling remittances directly to mobile phone wallets. 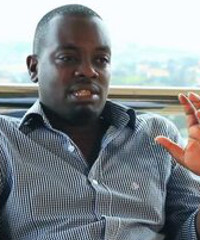 Redcore Interactive operates Remit, a platform that enables real-time debit and credit card and mobile money transfers from across the world to registered mobile money users in Uganda.

Stone Atwine, co-founder and CEO of Redcore Interactive, told How we made it in Africa the company is hoping to transform international money transfers into Uganda.

“We are making it easier, safer and faster for Ugandan migrants to send money back home.”

Africans in the diaspora remitted a total of US$60bn to the continent via money transfer companies in 2012, according to a World Bank report. According to some estimates, about 30m Africans live and work outside the continent and send money back home to support their relatives and also to invest.

Statistics show that it is more expensive for African migrants to send money back home than for any other migrant groups. According to the World Bank, bringing remittance prices down to 5% from the current average cost of 12% would put $4bn back in the pockets of Africa’s migrants and their families.

Remittance prices are even higher between African nations with South Africa, Tanzania and Ghana identified as the most expensive sending countries on the continent, recording prices of up to 20%.

“The majority of the 120m recipients in Africa depend on remittances for their survival, health, education and livelihood. But the high cost of sending money home means that remittances aren’t as impactful as they could be,” the report read in part.

Other than cost, recipients living in rural areas often have to travel to the brick and mortar agents of money transfer companies in towns and cities to withdraw the money.

According to Atwine, this is inconvenient for recipients since they can only withdraw money during working hours.

“It is also hectic and insecure when they receive large amounts of money and have to travel on a bus to go back home.”

To use Remit one has to register on the platform, enter the recipient’s registered mobile money phone number and the amount they want to send. Remit accepts most major cards including MasterCard and Visa. After the sender’s credit card is successfully charged, the sender will receive a delivery confirmation email and the recipient will receive money directly on their mobile phone within minutes.

“The recipient can then withdraw money from their nearest mobile money agent or even pay bills and make purchases directly from their phone.”

The service fee is 5.4% which Atwine says is “a bit on the higher side” and will come down in the near future.

“What we offer is very different and very enticing to Africans in the diaspora. It is instant and convenient for both the sender and the receiver because they don’t have to go to an agent. You can transfer money to your mum at midnight on your computer. All you need is your credit card.”

Atwine says Remit has moved $70,000 in the last six months, mostly from users in the Netherlands, Canada, the UK, Afghanistan and South Africa. The average transaction is about $200-$250.

To facilitate more transactions Remit needs to have more money on its mobile wallet in Uganda since it takes three to four days before money is released from international banks to its wallet.

“The big challenge right now is funding,” Atwine says. “We need about $200,000 in investor funding or a loan to be able to move about $1m comfortably.”

Working with banks and regulatory authorities is also challenging.

“It is a cumbersome process. They will dig into your life. They will ask about all the shareholders, your banking history and whether or not you have defaulted on loans in the past. They want to find out from Interpol if you have any criminal history. They also want money for deposits and assurances on how you will counter money laundering and financial terrorism.”

Atwine estimates that remittances to Uganda will hit 1$bn this year from last year’s $960m.

“Our target is to capture 1% of that. It is not easy but we think it is achievable. We would be able to run the business efficiently and reduce our service fee to attract even more customers.”

Atwine quit his job at a leading technology company to head Redcore Interactive last year and describes the journey as “really hard”.

“You really have to think through before you quit your job. You need to believe in yourself and the idea. I had to tell my landlady that I would not pay rent for the next three months. I had to cut my spending and pretty much just bought the really basic stuff.

“Some of my friends think I must have been crazy to quit a really good job to venture into the unknown. But I knew it was a sacrifice I had to make.”

So what keeps him going?

“The most motivating thing that gives me the strength to wake up every day and do this is the clients and their appreciation for what we do. That feeling that you are really helping someone and that they do appreciate your service is extremely satisfying. It is just cool.”

Remit plans to expand to Kenya, Ghana, Tanzania and Nigeria, “markets where mobile money is widespread”.

Ultimately, the goal is to expand across the whole of Africa and handle 10% of the continent’s $60bn annual remittances. Atwine admits this is an ambitious goal but one that can be achieved if they “keep doing the right things”.

“It is such a huge opportunity,” he says. “We think we can crack this market.”