Tullow Oil plc has announced the acquisition of a 50% operated interest in six adjacent licences covering the East African Rift Basins of Kenya and Ethiopia, an area of 97,000 km2. 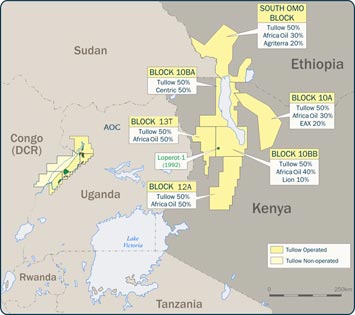 A map of the new acreage

Tullow has signed agreements with Africa Oil Corp to gain a 50% interest in five licences: Blocks 10BB, 10A, 12A and 13T in Kenya and the South Omo Block in Ethiopia. This acquisition expands on the farm-in to Block 10BA from Centric Energy announced in August.

Under the terms of the agreements with Africa Oil, Tullow will reimburse pro-rata past costs in each of these blocks and will carry Africa Oil for future net expenditures up to US$23.75 million.

According to a company press release, the East African Rift Basin acreage shares many geological attributes with Tullow’s Lake Albert Rift Basin position in Uganda, however, it is approximately ten times larger. The acreage, which is located 500 km to the east of Lake Albert has good evidence of a live oil system. Seismic programmes are planned for the acreage in 2010 and 2011 and the first wells are expected to be drilled next year.

The transactions are subject to formal government approvals.

“We are delighted to be extending our acreage across the prospective East African Rift Basins of Kenya and Ethiopia. Rift basins are a core play for Tullow and to date we have discovered and identified resources in excess of 2.5 billion barrels in the Lake Albert Rift Basin in Uganda. We look forward to working with our new partners and applying our valuable technical insights to this under-explored frontier region of east Africa,” said Angus McCoss, Tullow’s exploration director.