Boskovic Air Charters is one of East Africa’s largest air taxi service providers. In 1963, Yugoslavia-born pilot Zivota Boskovic started the business with a single Cessna 182. The Kenya-based air charter company has since expanded to a fleet of 16 aircraft, three of which are based in South Sudan flying for an international medical NGO. 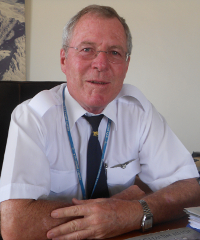 According to Boskovic Air managing director TAD Watts, the business has focused on a niche market as opposed to operating schedule services, for strategic reasons.

“The cost of acquiring and expanding an aircraft fleet are considerable and aviation is a marginal business. You can be very busy one day and then the next bookings go slow. It is one of those sensitive businesses.”

“There is an increasing amount of competition and we have to offer an increasingly higher level of service to convince people that we are the best,” he said. “We are the oldest company existing at [Nairobi’s] Wilson Airport. Many companies have come and gone and been bought and sold. We have built a reputation with our client base. The reputation is obviously safety but it’s also reliability and better capacity.”

Watts joined the company in 1975 as a junior pilot and worked his way up to become managing director in 1980.

“I still fly. I still train other pilots and test flights. I am very actively involved in the company.”

He noted that while Boskovic Air has faced numerous challenges in the past five decades, giving up on the business has never been an option.

“We employ close to 70 people and it would be a great shame if we just gave up the challenge and went into an easier industry. Flying is in my blood and I am not ready to give it up,” said Watts. “It is a fun industry to be in. As a pilot you are flying to different places. It is exciting. It is challenging. It is interesting. The routine of [working for a large airline], living in a hotel half of your life, I think the novelty for me would wear off.”

He cited the rising cost of fuel and increased taxation as some of the major challenges Boskovic Air has faced.

“In the late 70s there was a period when an aviation fuel factory caught fire. There was a shortage of Avgas for three months and that nearly grounded us,” said Watts. Incidents of insecurity, such as the 1997 Likoni clashes, the 2008 post election violence, kidnapping of tourists at the Kenyan coast and recent terrorist attacks have also affected the business.

“Our bookings took a serious downturn after the 1998 US Embassy bombing in Nairobi. Tourism did not stop but it took a nosedive,” he said. “Such incidents lead to nervousness and if a travel advisory goes out it has an impact on travel insurance: either costs become prohibitive to cover yourself or they won’t insure.”