The Kenya Tourist Board (KTB) has moved to dispel fears and reassure tourists of their safety in the country ahead of Wednesday’s referendum.

KTB managing director, Muriithi Ndegwa, says that necessary measures have been put in place in terms of security.

“The message we are sending to the tourist market is that Kenya is safe and they should not anticipate any violence,” says Ndegwa.

As Kenyans prepare to vote on the draft constitution in the August 4 referendum, the tourism sector has hit a dip as cancellations of bookings before and immediately after the voting have been recorded.

The situation worsened after the US government issued a travel warning to its citizens. Foreign media has also reported of tension hot spots.

Players in the tourism sector are counting millions in losses occasioned by cancellations of bookings over perceived fears of post poll violence as was witnessed in 2008.

This comes at a time when the sector is hitting the peak season and operators were hoping to cash in on high tourist arrival numbers.

InterContinental Hotels Group (IHG) director of sales and marketing for Africa, Daniel Ebo, told How we made it in Africa that the hotel group has received three cancellations of meetings and conferences that would have been held before and after the referendum.

“This together with other cancellations has already cost us. By the end of the voting period we anticipate to have made further losses due to the tension among tourists and fear of violence,” says Ebo.

The chairman of the Mombasa and Coast Tourist Association (MCTA), John Cleave, reckons that there is a widespread heightening of national security ahead of the referendum.

“Many countries already carry warnings against travel to parts of Kenya and against visiting public areas. It is unlikely they will change the level of their warnings for a once-off event,” he says.

Cleave says to ensure the safety of tourists during and after the polls, the Kenya Tourism Fund will operate a patrol system over three days around the referendum. 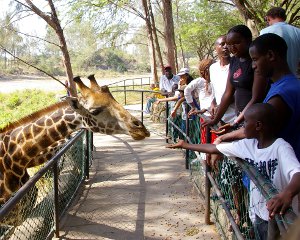 The Kenya Tourist Board has reassured visitors of their safety ahead of Wednesday's referendum.

“This is designed to give advance warning to tourist vehicles to steer clear of any emerging hot spots. Those plans are well in place,” he says.

Ebo also notes that the IHG group will not be taking any chances regarding matters of security.

“Despite the fact that the referendum is likely to be peaceful, we are taking precautions. We have enhanced security measures to assure tourists of their security in the country during the referendum,” says Ebo.

Although arrival numbers in the peak season might be affected, Cleave and Ebo concur that if the elections are peaceful, the impact will be very minimal.

Ndegwa reckons that tourist arrival numbers are still high and are likely to stay so. They might even surpass the number of arrivals during 2007, the benchmark year.

“International tourist arrival figures between January and June are estimated to have improved by 102% compared to . . . 2007. This is an indication that this year we might surpass the performance of 2007,” says Ndegwa.

In 2007 the international arrival numbers from January and June were recorded at 477,000.

He adds that the positive trends are an indicator that Kenya has indeed recovered from the effects of the post election violence, however, being a sensitive industry, any incidents of violence might affect these achievements.