The discovery of oil in Kenya’s northern Turkana region in 2011 has heightened investor interest in the semi-arid region. Turkana is one of Kenya’s most marginalised areas and has high levels of poverty, illiteracy, HIV/Aids infections and frequent instances of violent inter-community conflict. 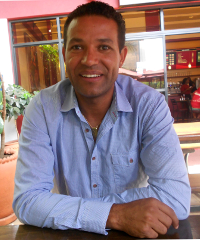 But the region’s fortunes are changing. Now two years after the oil discovery, a huge underground water reserve that can meet Kenya’s total water needs for the next 70 years was recently confirmed. In November, more than 1,000 international tourists are expected at Sibiloi National Park on the northeastern shore of Lake Turkana to view the hybrid solar eclipse.

“There is a lot of development happening around. There are a lot of new properties coming up. More tourists are now interested in going there because they might get nice rooms that have air conditioning. But security is still a challenge,” says Nikos Pocock, founder and CEO of tour company Africa Calling Safaris.

While for many people Turkana is a recent attraction, Pocock has been organising expeditions to the region for 10 years.

According to Pocock, he chose to curve a niche in organising tours to unique destinations after realising that most tourists to Kenya would only visit the traditional attractions: the Maasai Mara and the beaches along the coast.

“I specialised on northern Kenya and southern Ethiopia. I developed a very unique clientele and that has boosted our business. The tourists are attracted by the powerful culture, the rough road, hot sand and the beautiful people.”

Thanks to his experience working with marginalised communities in northern Kenya, Africa Calling Safaris became affiliated with National Geographic and BBC film crews producing documentaries in the region.

“Tourism to me is a passion. I love wildlife. I love nature,” Pocock said.

“I hated computers very much. I couldn’t imagine being confined in an office for more than one hour.”

After 10 years in employment, he chose to start his own business in 2005.

“One thing I did not realise is that when you are in business you have to handle everything yourself. I had a very difficult start not knowing what I would eat the next day. But I am glad that my perseverance and patience has paid off,” he said.

Pocock said he has faced many challenges in running his own business.

“There is a lot of competition, which is good, but the market has become saturated. The other challenge is the marketing process. It is time consuming and we have to go to other markets in Europe and Asia trying to market Kenya as a preferable destination. For four years we do well and in the fifth [election year] politics destroys the image of the country,” he said.

He described the period between 2007 and 2009 as one of his “most difficult times in business”.

“I was severely affected by the post-election violence. I lost all my bookings. In the whole of 2008 I had only one departure. I was really struggling with overheads. I had to lay off staff,” said Pocock. “We had leased an office for six years but we had to terminate the contract before maturity. I had spent over KSh1m (US$11,800) in renovating the office and we had to sell all that for KSh 100,000 (US$1,200). That is how desperate I was.”

Despite losing nearly everything, Pocock chose to revive his tourism business.

“I never do this for the money. I do it because I have a strong connection with what I do. I really have a passion for what I do. I believe there is a lot of potential in tourism. I still want to maintain my boutique business. I don’t want to expand to the extent of having a fleet of 100 cars because that would affect the quality of our services.”

He noted that his business picked up in 2010 but there have been other challenges since, such as concerns over Kenya’s security.

“The Westgate terrorist attack has affected a lot of tour companies in many ways. There have been lots of cancellations, especially for hotels and lodges.”

He also decried the rising costs in the tourism industry, ranging from hotel charges to park entry fees.

“Just the other day we arrived at [a ranch] where entry fees have always been US$30 per person. But they told us at the gate that the charges have increased to US$80 per person and I had a team of 10 tourists.”

Pocock advised aspiring entrepreneurs to do proper research before starting a venture and put in a lot of hard work.

“I have lost a lot of money to learn what I know today,” he said. “You should have patience and be willing to learn from others.”

He added that perseverance, offering quality services and good customer relations are critical to success in business.

“Business is about who can run faster,” he said.