The tourism industry is a major income earner and employment provider in many African countries. However, this industry faces many obstacles. The uprisings in North Africa, the threat of terrorist attacks, political instability and recession in developed countries have all negatively affected the tourism industry on the continent. 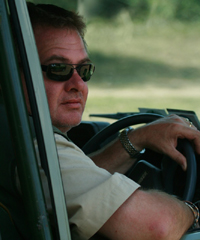 Richard Corcoran has been involved in the tourism industry in Kenya for over 30 years and has weathered many storms. Corcoran is the co-founder and president of Liberty Africa Safaris, a destination management company based in Kenya that provides services for tour operators from all over the world. The firm has a fleet of 40 minibuses and 25 Land Cruisers. The business also operates two lodges along the Kenyan coast, Delta Dunes Lodge and Kipalo Camp.

Last week a fire at Jomo Kenyatta International Airport left thousands of people stranded, many of them tourists. “It was a horrific week,” says Corcoran. “We had more than 50 people stranded here trying to leave and more than 50 people trying to get in to join the safaris. It [the fire] has cost us a lot of money but I must say I am also quite impressed… we were back in operation two and a half days later.”

Corcoran began running wildlife safaris as a young boy with his father, and fell in love with the bush. After completing high school he decided to start his own business with his wife Annie. “I used to do safaris with my dad. I grew up with a passion for the bush, a passion for Africa, a passion for the people and, slowly, over my whole life, [it’s become what I do best],” says Corcoran.

In 1997 Mario Enzesberger, founder and CEO of destination management group of companies Liberty International, joined one of Corcoran’s safaris as a client. Enzesberger enjoyed the trip and decided to expand into Africa through Corcoran’s business. “There was no way we could grow our little operation. We were never going to become major players. Today we are the third biggest operation in Kenya thanks to being part of an international group. Mario also has a big passion for Africa,” says Corcoran. With the backing of an international group, Liberty Africa Safaris was able to expand and now operates across Africa with offices in South Africa, Morocco, Egypt, Libya and Kenya.

Corcoran says the expansion was partly inspired by the need to diversify into other markets as a cushion against difficult times in East Africa, referring to the 1998 bombing of the US embassy, repeated tribal clashes and post election violence in Kenya in 2008. “There are times here when things are really bad. Generally, when East Africa is not doing very well, South Africa is booming. If it is South Africa that is struggling like it did after the World Cup, then East Africa is booming and it kind of swings like a pendulum,” says Corcoran.

But the expansion also presented challenges. “The last time I saw our office in Libya was on the news and there was no wall on the front of it. The whole place was destroyed,” says Corcoran. The company’s Egypt branch has also been struggling since the country’s political unrest began in 2011. “The office has been downscaled,” says Corcoran. “In Egypt and Libya all [we] can do is keep our team. Tourism is all about people. You keep your team, your contacts… until things improve and then you reawaken everything. It is going to take time, but things will get better.”

In Kenya, the kidnapping of tourists in 2011 and last year’s tribal clashes in which more than 110 people were killed resulted in tourists cancelling their bookings at Delta Dunes Lodge.

Corcoran says such difficulties have brought out the resilience and tenacity of African people. “This is Africa. I struggle to explain to my partners how Africa works, how things can turn around so quickly, both for the positive and for the negative. Europe is all about stability.”

“In Africa everything is done with the heart, not with the head. If you sit down with a calculator and start doing all these risk analyses, then Africa is not for you,” he says. “You have to have a passion for Africa.”