UK-based fashion chains Topshop and Topman, owned by the Arcadia Group, are coming to South Africa, with plans to open their 950m2 flagship outlet in Johannesburg’s Sandton City by end of November, and a second stand-alone store in Durban’s Gateway shopping centre before the end of the year. 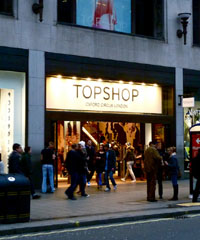 Customers outside a Topshop store in London

Last month How we made it in Africa reported that Topshop had partnered with the Cape Town boutique Unknown Union to open a pop-up store, also known as a shop-in-shop, to possibly test the South African market. By the end of the month they announced their decision to open a stand-alone store in South Africa.

Edcon and House of Busby have been given the South African franchise rights for the UK retail chain. House of Busby – a company which sources goods, sets up and runs stores for brands in South Africa – will operate Topshop’s and Topman’s stand-alone stores.

Edcon is among South Africa’s largest apparel and textile retailers, with 10 brands selling in more than 1,000 stores in South Africa, Botswana, Swaziland, Namibia and Lesotho. Its leading brand Edgars is also one of the largest providers of retail consumer credit in South Africa and will host Topshop’s smaller shop-in-shops at key Edgars stores.

Debbie Millar, executive of investor relations and media at Edcon, explained why the South African franchise partnership is mutually beneficial for both Edcon and Topshop/Topman.

“Edgars brings significant scale and footprint and a format that allows for shop-in-shop concepts to be rolled out quickly,” stated Millar. “The inclusion of Topshop/Topman for Edcon is an important pillar of our overall strategy but needs to be seen in the context of the various initiatives being undertaken to reinvigorate the stores and deliver what we believe customers are looking for. Product mix is one key element of our multi faceted strategy. These traits are what make the relationship work for both Edcon and Topshop/Topman.”

Topshop operates more than 750 stores worldwide with South Africa being the brand’s 37th market and its first country in Africa.

Kate Ormrod, a retail analyst at Verdict Research, said in a recent analysis that with growth slowing in Topshop’s more mature markets, it makes sense for the brand to look at emerging markets where there is less competition from similarly positioned international brands.

“Topshop’s move to South Africa is a good one given the potential of the market, particularly as it is the most developed country in the region, has a stable economy and good infrastructure,” said Ormrod. “It also has a growing middle class, which the mid-market Arcadia-owned brands will target so it should suit local demand and resonate well with consumers.”

In recent years, Africa – and specifically South Africa – has seen the entrance of other international retailers that are becoming increasingly interested in opportunities on the continent. “I think the interest actually started sometime ago, although there has perhaps been a more rapid expansion recently,” said Veronique Shera, managing director of Busby Retail.

In March, US-based fashion retailer, Gap Inc. opened two stores in South Africa. The retailer is reportedly using South Africa as a base for expansion into the rest of the continent. Gap’s move followed that of Spain’s Inditex Group – Europe’s largest fashion retailer – which launched its first South African Zara store in Johannesburg late last year, and it’s second in Durban in March.

Last year How we made it in Africa reported that Spanish fashion chain Mango aims to have a presence in each of Nigeria’s major cities. Mango opened its first outlet in Lagos in December 2009.

“There has been an interest in international brands for some time and we have seen that grow in the last five years,” added Shera. “I think the South African consumer is exposed to international brands through all sorts of media, more and more so than they perhaps were [exposed] to five to ten years ago. And there is a very strong emerging middle class and I think that those are all reasons that make [South Africa] an interesting platform.”

It is not yet known whether or not Topshop will be using South Africa as a foothold to leverage itself into other African countries. However, Ormrod suggests that it may lead to more of the Arcadia Group’s brands entering the country in the future. “There is also the potential for Arcadia to bring over its other clothing brands, such as Miss Selfridge and Dorothy Perkins, if it believes there is sufficient demand to support physical stores,” said Ormrod. “Once it has developed the relationship with its franchise partners Edcon and House of Busby and got logistics in place, it will have a solid foundation to roll out more of its brands.”