Microfinance banker Jennifer Riria was this year announced the Kenyan country winner of the EY World Entrepreneur of the Year award. Last month she attended the glitzy ceremony in Monaco. 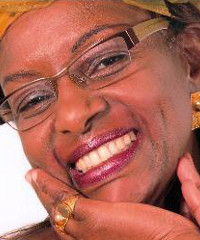 Riria compares the recognition from the World Entrepreneur of the Year award to winning an Oscar.

“From the time I landed at the airport [in Monaco] to the time I left for Kenya, it was bliss plus more bliss and recognition and accolades.”

Riria left her job at the United Nations to assume the helm at KWFT in 1991. At the time the institution was technically insolvent but she turned the business around, and today KWFT has 40 physical bank branches and 235 field offices.

Riria says the success story of the microfinance bank is proof that women and the poor are bankable. She narrates how in 1992 she approached a bank manager seeking a loan to lend on to women. The bank manager was appalled and commented, “Jennifer, do you want your women with their baskets to crowd my counters?”

“My reaction was to cry… I have shed tears for the women of this country over and over again. Down the line we proved that women are bankable and poor people are bankable. Today banks have set up cute products for women; they call them ‘diva’ and other cute words. I find fulfilment in knowing that banks have finally recognised the potential of women in the economy,” says Riria.

Since her early days at KWFT, Riria faced many challenges trying to empower women in a patriarchal society. She was labeled a “family breaker”, “disobedient woman” and men openly told her to leave their wives alone.

“There are many poor people in Africa and the majority of them are women. We chose to work with women because they are the mainstay of the economy. We want women to transform the way the world works for them and their families. You cannot transform it for them but you can build their capacity to transform their own lives. That is what is sustainable,” explains Riria.

Growing up in rural Kenya, Riria witnessed firsthand the challenges women faced at the time.

“I came from a poor background. I watched my mother and other women in the village operate as donkeys. They would carry on their backs firewood, bananas, a bag of other stuff and a baby. I saw them get abused, beaten and work 24 hours a day and they did nothing,” she recalls.

“When I qualified to go to high school my mother told me ‘don’t you ever allow a man to hit you and don’t ever stop because a man tells you to stop’. She said ‘I have suffered for you and I have bore it for you. You will never go through anything I went through’ and she repeated that over and over again until it stuck with me.”

These days it is easier for women to access funding and many of the struggles Riria’s generation faced no longer exist. However, she says that young women should continue to advocate for their economic empowerment.

“History is very important but you can’t live in history. The world is like a wheel, it is constantly turning. [Those were] our challenges [at] that time… and the challenges today are different.”

Earlier this year Riria simultaneously launched two books: A History of Higher Education in Kenya and her own autobiography. As her retirement draws closer, she is now writing another book on the story of KWFT, which she hopes will be used as a case study in business schools.

“That book is going to be hard to write, but I will write it,” says Riria.